On January 21, representatives of the private organization called the Fukui Council for Nuclear Peaceful Use visited the offices of Tsuyoshi Hoshino, parliamentary vice minister of the Ministry of Economy, Trade and Industry (METI). There, they submitted him a written request for the early restart of Japan’s nuclear power plants, as well as assistance to NPP siting areas stemming from the almost five-year shutdown. 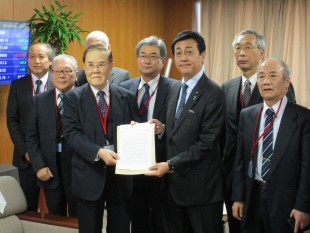 The council engages in voluntary activities to enhance understanding on nuclear power, primarily in Fukui Prefecture, home to more NPPs than any other prefecture.

Having fully cooperated with Japan’s energy policy, the council asked the government to reflect the following points in national policy:

No NPPs in Fukui Prefecture have been restarted so far since being shut down in March 2011. The council, saying that nuclear power is already a “major industry” in the country, is concerned that regional economies have become exhausted, urging that economic assistance measures be provided as soon as possible.

Additionally, the council argued that Japan needs to maintain its commitment to nuclear fuel cycle policy, from the viewpoint of effective use of uranium resources, the reduction of radioactive waste and the accumulation of technology. It also said that necessary measures would have to be implemented so that R&D can be steadily and safely carried out at Monju with coordination among relevant ministries and agencies.