A debate on the advisability of geological disposal of high-level radioactive waste (HLW) was staged recently by students belonging to the Faculty of Education at the Chiba University. Assisted by the Nuclear Waste Management Organization of Japan (NUMO), the students considered whether Japan should cancel the ongoing HLW geological (i.e., underground) disposal project and instead require management above ground. 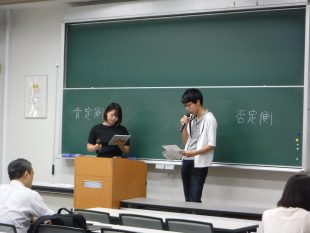 A course on debate skills, taught by Professor Daisuke Fujikawa at the same university, has enjoyed the involvement of NUMO for the past eight years. This time, the students, while studying debating techniques and methods, attended lectures by nuclear specialists in preparation for the debate. Those who wished to do so also visited nuclear power plants (NPPs), the Horonobe Underground Research Center, and the Japan Proton Accelerator Research Complex (J-PARC).

Two of the ten debate teams in the class (each consisting of from three to five students) were chosen to debate the question publicly. The team on the affirmative side of the proposition—that is, arguing in favor of above-ground HLW management—asserted that the safety of long-term HLW management in dry casks had been demonstrated during the giant earthquake that struck eastern Japan in March 2011, and that partitioning and transmutation technology could reduce toxicity in the future. 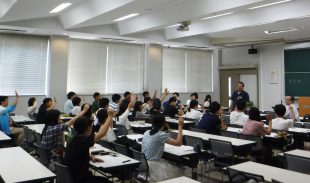 Meanwhile, the team on the negative side on the proposition—that is, arguing against the abandonment of geological disposal—asserted that the waste would remain toxic even after partitioning and transmutation. They also argued that management above ground was inherently risky, and that huge costs would be incurred in continuing it indefinitely. The debate was most heated on the issues of safety and cost. 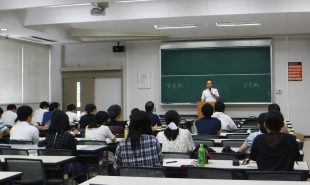 The debaters themselves seemed to agree that their personal understanding of geological disposal had been greatly improved as a result of the debate, but that they needed to further enhance their communication skills.

NUMO supports programs such as this as a means to bolster education and reach out to the younger generation. It has been involved with the debate course at Chiba University since 2012. During that time, many students who have taken the course have said that they would like to become teachers and teach about geological disposal in the future.