On June 20, President Toshio Hirano and other representatives from Japan’s National Institute for Quantum and Radiological Science and Technology (QST) met the press to explain the FY19 reorganization of the organization into “QST 2.0,” with research on quantum life science at its core. 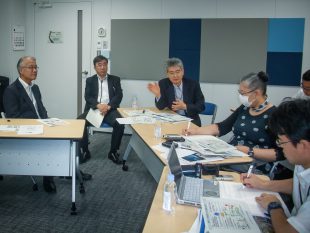 The institute was created in April 2016 through the partial merger of its predecessor, the National Institute of Radiological Sciences (NIRS), together with the Quantum Beam Directorate and the Nuclear Fusion Directorate of the Japan Atomic Energy Agency (JAEA).

On the occasion of entering its fourth year, QST is carrying out the major structural reorganization, aiming to reinforce its R&D efforts using its next-generation charged-particle cancer therapy device, known as the quantum scalpel. It will also continue to develop human resources to work in radiation emergency medicine.

The Quantum Life Science Directorate, a new organization directly under President Hirano, will take a nationwide approach, developing organic linkages among several research bases and cross-appointing researchers from various universities to realize QST’s goals: to clarify life phenomena based on quantum theory and technology, and to promote medical development.

Expecting the new research area of quantum medical science to span “from scholarly research to innovation,” QST’s approach and commitment is to extensively return its research results to society.

Placed under the newly-established Quantum Medical Science Directorate are the National Institute of Radiological Sciences (NIRS), the Center for Advanced Radiation Emergency Medicine and the QST Hospital. In cooperation with other directorates, the NIRS, an R&D institution, will especially focus on developing the quantum scalpel, which integrates superconductivity and laser technologies, to realize a society with “no cancer deaths and healthier longevity.”

The QST Hospital, redesigned since the NIRS took it over, promotes the clinical application of research results. An International Therapy Research Center will also be newly established to accept foreign trainees in the area of charged-particle cancer therapy.

At the June 20 press conference, Managing Director Takashi Nakano of the Quantum Medical Science Directorate stressed that charged-particle cancer therapy would never be able to come into wide use with equipment at its current size.

It has been a quarter century since the Heavy Ion Medical Accelerator in Chiba (HIMAC)—the pioneering device for charged-particle cancer therapy—was first used in treatment. Nakano explained the beginnings of R&D on the quantum scalpel, which is about one-fortieth the size of HIMAC, as well as its future outlook.

Meanwhile, the equipment at Gunma University is already one-third the size of that used at HIMAC. Given, however, the expense of constructing a special building to house it, the goal is to create a device—nearing the stage in which a prototype is feasible—that can be installed in existing medical facilities.

Also at the same press conference, Toshikazu Yamashita, director of the Center for Advanced Radiation Emergency Medicine, talked about his organization’s activities. In addition to his center, he said that four similar centers have been designated by the Nuclear Regulation Authority (NRA) at the following institutions around Japan: Hirosaki University, Fukushima Medical University, Hiroshima University, and Nagasaki University.

Among the five, the NRA has designated the one located at QST as the key site, making it responsible for playing a central, guiding role. Yamashita added, though, that all five bases would cooperate with each other to build a nationwide system.