The Environmental Radioactivity Measures & Radioactive Waste Disposal International Exhibition (RADIEX2016), sponsored by Kankyoshimbunsha Co., Ltd., was staged from October 19 to 21 in Tokyo. Exhibits were made by some ninety companies and organizations, drawing 6,226 visitors over the three days. 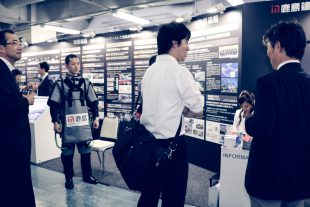 Under the theme of “Environmental Radioactivity Measures towards Full-scale Interim Storage and Decommissioning,” there were exhibitions on waste disposal, emphasizing construction of interim storage facilities and environmental solutions, together with those on decommissioning technology, focusing on innovations such as robots and drones.

For example, at the booth of the Fukushima Consortium of Robotics Research for Decommissioning and Decontamination, with a membership of 148 organizations, exhibits were made by the Basalt-AWSS Co., Ltd. along with five others. That company, along with the College of Engineering at Nihon University in Japan, has developed a high-performance gamma-ray shielding container using high-density basalt fiber reinforced concrete.

Meanwhile, the booth of Chiyoda Technol Corporation displayed a mask made by Shigematsu Works Co., Ltd. for use in nuclear facilities. The mask features better downward visibility and weighs less than ordinary masks.

A RADIEX symposium was also held at the site, featuring as one of the speakers Keith Franklin, First Secretary (Nuclear) at the British Embassy in Tokyo. He said that while people were apt to think first about the negative aspects of decommissioning, highly capable technological people were gathering at sites, full of excitement about the possibilities. 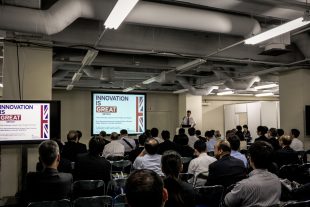 As Britain is where the world’s first commercial nuclear power plant was built, he added, it has reactors at every stage along the decommissioning timeline. That experience, he emphasized, can be shared with and be valuable to Japan, which will be engaged heavily in decommissioning from here on.

Franklin went on to say that given that because decommissioning requires a span of decades, not only are the perspectives of the various parties often different from the start, but that they can also shift over time. In order to proceed with it consistently, he said that it was important that stakeholders, including the local community, be involved in decommissioning projects from an early stage.

He then referred to a 2013 event in which cricket teams from the British Embassy played in Minami-Soma City, Fukushima Prefecture. The story had been picked up by the global media, Franklin said, and was a significant affirmation of safety in Fukushima.

Next to speak at the symposium was Eiichiro Watanabe of the Waste Technology Section, Division of Nuclear Fuel Cycle & Waste Technology, International Atomic Energy Agency (IAEA), who explained about cooperation between the IAEA and Japan on decommissioning. Anticipating the arrival in the near future of a “great age” of decommissioning, he emphasized that his agency would function as an important platform for countries in sharing information, knowledge and experience to the greatest extent possible, in order to carry out the decommissioning process more efficiently.

He then noted that although Japan ranks second in contributing funds to the IAEA, following the United States, it lags in terms of participation with personnel and in personnel exchanges. He expressed his hope that members of the younger generation would actively participate in decommissioning discussions at the IAEA, and that that would lead to human resource development supporting future businesses in the field.