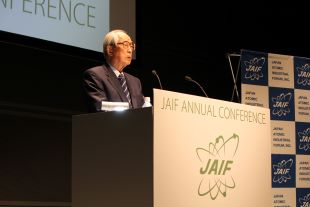 Ladies and gentlemen, I am Chairman Imai Takashi of the Japan Atomic Industrial Forum.

I would like to say a few words at the opening of this 54th JAIF Annual Conference.

Because of the coronavirus pandemic, the conference is taking place online this year, with about 830 people participating.

I thank you all.

It has been ten years since the giant earthquake that struck eastern Japan in 2011, along with the accident at TEPCO’s Fukushima Daiichi Nuclear Power Plants.

I extend anew my sincere sympathy to the people affected by the disaster, including those who are still living as evacuees.

I express my respect and gratitude to the many people who are striving for the restoration of Fukushima, and to our members who have provided support.

Last year, Prime Minister Suga Yoshihide declared the goal of achieving carbon neutrality by 2050, both domestically and internationally. Now, the public and private sectors of Japan are joining forces to determine the best ways to do that.

According to data from the International Energy Agency, Japan has avoided approximately 4.6 billion tons of CO2 emissions so far thanks to nuclear power.

Without nuclear power, CO2 emissions in the domestic power generation sector would have increased by at least 25 percent.

Today, about 35 percent of global power sources are non-carbon, about 30 percent of which is nuclear power.

Nuclear power has been a major element in the fight against global warming. Toward achieving carbon neutrality by 2050, its continuation is essential. Research and analyses in Japan and elsewhere have made that abundantly clear.

The global pandemic has highlighted Japan’s dependence on other countries, and concerns about national security have become conspicuous.

When it comes to the stability of supply, it goes without saying that nuclear power is a robust, environmentally sustainable, and quite reliable power source.

It is also true that, despite those advantages, Japan’s nuclear industry faces various difficulties.

We, the industry, while endeavoring continually to further improve safety, must also promote the restart of existing reactors and the extension of operating lifetimes. That is the way in which we will regain confidence, not only from siting areas but across society—by accumulating a record of safe performance.

In order to sustain nuclear power into the future, building new reactors and replacing older ones must be clearly positioned within national energy policy.

Movement is needed in other areas as well, toward the early establishment of the nuclear fuel cycle, and the disposal of high-level radioactive waste.

Covid-19 has compounded the challenges the world already faced, including those of the economy, climate change, and energy.

In such circumstances, the path forward for the nuclear industry—both Japan’s and the world’s—will not be smooth or level.

Accordingly, this year’s annual conference, by drawing on the best available examples, will be an opportunity for all of us to address our future: what we want, and how we can get there.

In closing, I would like to thank all of our guest speakers and panelists for appearing on stage today, and each of you, again, for participating as well, despite your busy schedules. Thank you for your attention.