Since 1959, JAIF has carried out an annual fact-finding survey of the Japanese nuclear industry, focused on nuclear power companies, in order to understand the overall state of the industry, to provide information to its member companies, relevant ministries and agencies, and to reflect the results in JAIF’s own business activities.

This latest survey was conducted for fiscal 2016, during which three nuclear power plants (NPPs) were in operation, to ascertain prevailing circumstances for the industry engaged in nuclear power.

In the qualitative portion (questionnaire), business sentiment in industries engaged with nuclear power generation and the effects of shutdowns of NPPs are investigated. A question on deregulation of the retail power market from April 2016 was also included in this survey, for an understanding of the effects on the power-generating industry.

Although the environment for nuclear-power and related industries, which had worsened after the March 2011 accident at the Fukushima Daiichi Nuclear Power Plants, showed signs of improving – new regulatory standards being met; some nuclear power plants (NPPs) restarted – expenditures by electric power utilities and sales by mining and manufacturing firms decreased slightly during FY16. The number of nuclear-related workers increased slightly in the electric power industry but declined in mining and manufacturing, for a net overall reduction.

Most survey respondents described their business sentiment in FY17 as “bad,” and, in comparing sales with those in FY15, most responded that they were “unchanged” or “reduced.” Some foresaw the same situation as in FY17 prevailing in yet another year’s time, with similar effects on business sentiment and expected sales. In terms of effects of the shutdowns of NPPs, many respondents continued to point to reduced sales and difficulties in maintaining and continuing their technological capabilities. Those choosing the latter answer – maintaining and continuing their technological capabilities – have increased.

3. Future course of action for the nuclear power industry

The economic scale of the industry remains large and the significance of the employment it provides remains high. The number of locally hired workers accounted for nearly 50% of total workers in the industry, so their importance to local economies is not insignificant. Meanwhile, in circumstances where restarting NPPs is not making much progress, there is concern about adverse effects on maintaining and continuing technological capabilities and maintaining employment. In order to sustain nuclear power generation as a key base-load power source ensuring Japan’s energy into the future, a steady nuclear policy should be carried out to support an investment environment for companies. 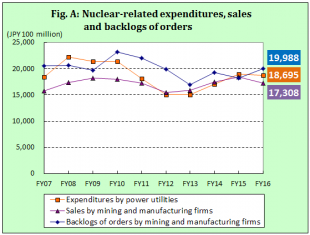 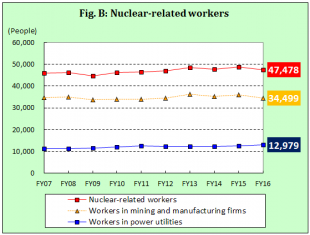 The combined total of all workers locally hired by electric power utilities and mining and manufacturing firms in nuclear siting areas was 22,758, down 468 from the previous year, accounting for 48% of all nuclear-related workers, almost the same percentage as in the previous year. (Fig. C) 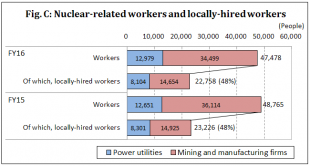 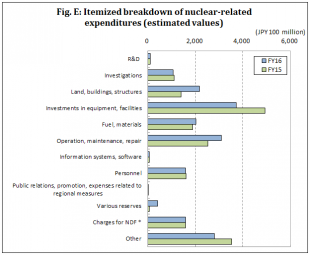 Total expenditures by power utilities on measures to meet the new governmental regulatory standards were JPY367.5 billion (USD3.3 billion) in FY16, accounting for 20% of the total nuclear-related expenditures of those companies. (Fig. F) 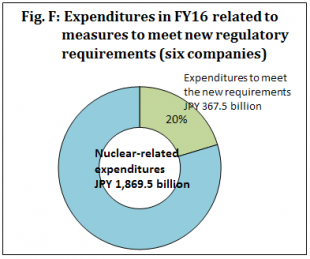 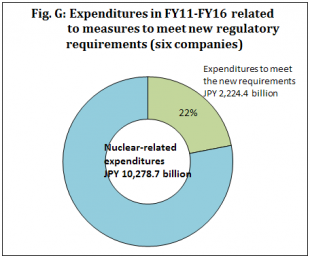 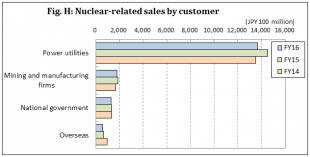 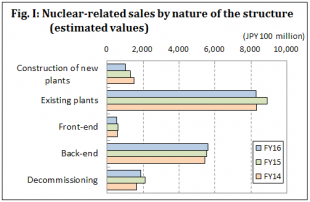 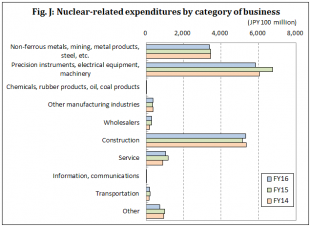 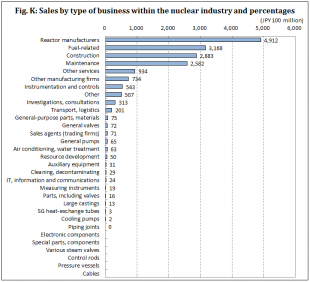 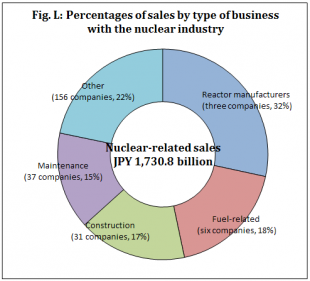 (Note) The questionnaire survey primarily reflected the current fiscal year (FY17), when it was conducted. Responses to the survey were not the official views of the respondent companies, but are recognized to be the thoughts of those who answered the questions. 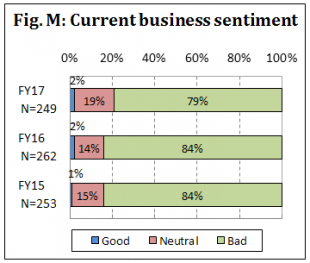 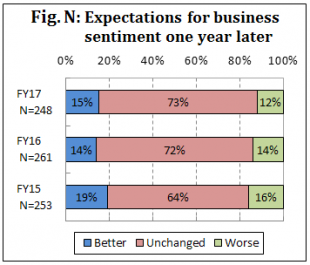 In year on year comparisons with FY16, respondents in FY17 who answered that their sales had decreased – the overwhelming effect since the Fukushima Daiichi accident – fell to 35%, but those who answered that sales had increased (26% in the FY16 survey) stood at 23%, down three points. (Fig. O) 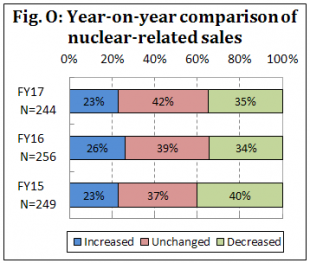 Respondents expecting that sales in one year’s time (FY18) would increase from those in FY17 dropped to 18%, down two points. (Fig. P) 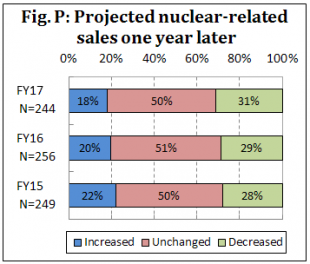 Regarding the adverse effects of Japan’s current suspension of NPP operations, over 50% of the respondents pointed to reduced sales and difficulties in maintaining and continuing their technological capabilities, but those citing reduced sales decreased, while the percentage of those choosing the latter (i.e., difficulties in maintaining and continuing) increased. (Fig. Q) 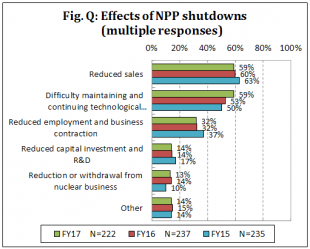 As for the extent of sales declines, a slight increase was seen in respondents saying their sales were reduced by more than 80%, while those saying the decline was over 20% fell to 48% on the whole. (Fig. R) 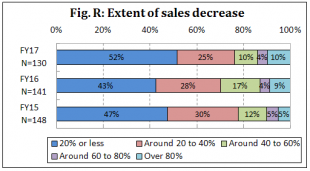 Regarding specific adverse effects in maintaining and continuing their technological capabilities, most respondents answered difficulties in carrying out OJT(技術伝承). (Fig. S) 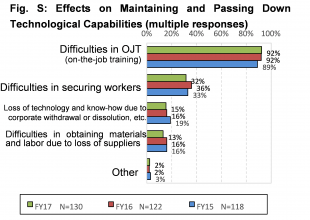 Regarding effects on employment and business contraction, most cited the need to shift staff to other sections. (Fig. T) 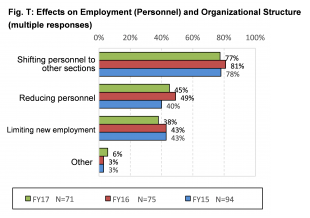 <Expectations for the Government and Electric Power Utilities>

Regarding expectations for the government and the power utilities, the percentage of survey respondents saying they hoped for political support for financial aspects declined, while the percentage wanting support related to improvement of technological capabilities increased. (Fig. U) 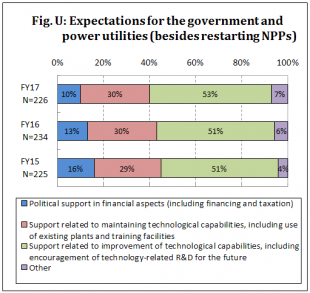 <Effects of Deregulation of the Retail Power Market>

<Issues for the Nuclear Power Industry> 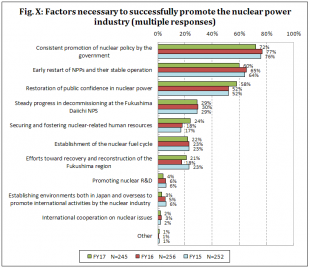