On November 26, Japan’s RIKEN made a demonstration of its RIKEN Accelerator-Driven Compact Neutron Source System (RANS-II) to the press. The system will be used in a wide range of areas, including the diagnosis of the deterioration of concrete infrastructure and the analysis of raw materials and products at factories. 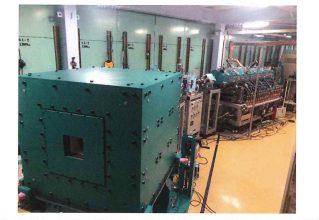 Currently, neutron sources used for industrial purposes include the Japan Proton Accelerator Research Center (J-PARC) and the Japan Research Reactor No. 3 (JRR-3). In cooperation with industry, RIKEN has been working to develop a transportable neutron source system. In 2013, it succeeded in visualizing internal steel corrosion nondestructively using a compact neutron-driven system (RANS). Later, in 2016, it developed technology to see internal damage in concrete, and two years later, it created technology to measure salt in concrete nondestructively.

With the RANS-II released this time, RIKEN, by downsizing the aforementioned RANS, has successfully halved both the length and weight of the previous system by reducing the proton beam energy from the linear accelerator from 7MeV to 2.49 MeV, and by using one accelerator—referred to as a radio-frequency quadrupole accelerator (RFQ accelerator)—instead of linking two accelerators. Additionally, the size of the shielding body was substantially reduced to one-seventh or so. 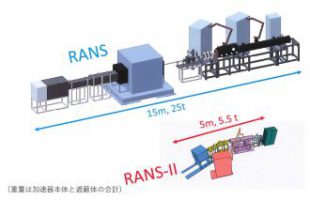 In the future, RIKEN will try to realize a prototype of an outdoor measuring system that is transportable and nondestructive, and which is capable of visualizing the internal deterioration of bridge structures and the like. At the same time, it aims to develop a fixed accelerator-driven compact neutron source system that will be readily adopted at work sites.

Speaking to the press on November 26, members of the Neutron Beam Technology Team of the RIKEN Center for Advanced Photonics (RAP), engaged in the development of the system, referred to a bridge collapse involving casualties at a fishing port in Taiwan last month. They emphasized that the use of neutron systems is an effective means to maintain and repair infrastructure susceptible to age deterioration and construction failure, adding that the penetration of moisture and salt into concrete and the corrosion of reinforcements were particular concerns.