In August, the Chugoku Electric Power Co., filed an application with the Nuclear Regulation Authority (NRA) of Japan to investigate the compatibility of the Shimane-3 (ABWR, 1,373MWe) with the country’s new regulatory standards. NRA has been making a similar examination at the power company’s Shimane-2 (BWR, 820MWe) since January 2014. 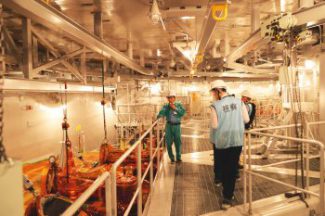 Prior to the filing, Shimane Prefecture had presented the power company with several conditions, including the following: (1) making earthquake and tsunami evaluations based on the latest knowledge, and adopting safety measures accordingly, (2) implementing severe accident measures after considering their effectiveness and impact, and (3) establishing disaster-relief measures in close cooperation with local governments.

The prefecture agreed to the filing on August 9, with Chugoku Electric Power submitting its application the day after.

Going forward, Atoms in Japan (AIJ) will report on the work on safety measures based on the new regulatory standards, as well as the latest progress at the Shimane-3.

The Shimane nuclear site is situated on an area measuring over approximately two hundred hectares, on which stand three units, including Unit 1 (the decommissioning plan for which was approved in April 2017).

On the seaward side of the site are seawalls reaching 15 meters above sea level, offering protection against possible tsunamis predicted to be up to 11.6 meters high. Should a tsunami actually come over the seawalls, water will be prevented from entering plant buildings by improved, watertight doors.

Assuming further, however, that safety-related systems or equipment are affected in such a way that existing power sources would shut down, the alternating-current (AC) power necessary to drive the cooling systems in emergencies would be ensured by gas-turbine, vehicle-mounted generators. The control system for the cooling, meanwhile, would then be operated under direct-current (DC) power from a power supply vehicle.

The safety measures for Unit 3 alone comprise a total of sixty-two individual work items, of which fully half (thirty-one items) have already been completed. The work at Unit 2 will be completed sometime during the current fiscal year (April 2019 to March 2020), with that at Unit 3 slated to be finish between April and September 2020. 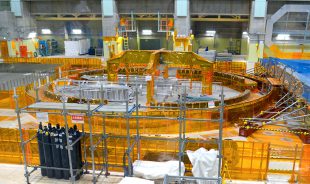 The commercial operation of Unit 3 was initially expected to begin eight years ago, in December 2011. Although the reactor facility itself has been completed, work on safety measures is now underway. Because the unit has never been operated, this reporter was able to enter the facility wearing only a standard helmet.

Inspections and maintenance are currently being conducted regularly at the site. The turbines are periodically rotated to prevent their shafts from becoming bent, and the packing of watertight doors has been regularly replaced. Some equipment is covered with vinyl sheets. 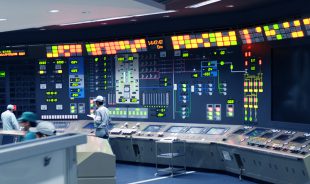 The indicator panel within the central control panel is larger than traditional ones, improving visibility and enabling all operators to readily apprehend information. In addition to hard switches similar to conventional ones, the flat-panel display provides touch operation for improved, integrated operability. Although that would enable operation by fewer operators, Chugoku Electric Power will still use seven-person teams, the same size as those find in Unit 2.

Shimane-1 is being decommissioned, while the operation of Unit 2 has been suspended, and Unit 3 has never been operated at all. No BWRs are currently in service in Japan.

“We are going through a generational change, with veteran workers having already left and new people coming in. Workers who have never operated actual plants before obviously lack the ‘feel’ for what is happening,” said Deputy General Manager Chiaki Hasegawa of Chugoku Electric Power’s Shimane Nuclear Power Headquarters, deeming the current circumstances severe.

He said, furthermore, that trying to develop proper personnel without any nuclear reactors in service was highly problematic. In response, he said, the power company had dispatched its operators to other PWR plants that have already been restarted, as well as to thermal power plants, to help them brush up and improve their proficiency in environments similar to their own once operation resumes.

He added that the power company would also be sending operators overseas, as well as boosting cooperation with other power companies with BWRs. 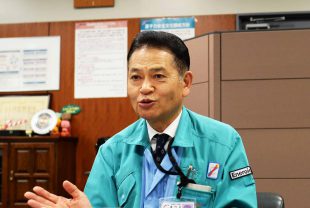 The Shimane site, in Matsue City (Shimane Prefecture), is the only nuclear power facility situated in a prefectural capital in all of Japan (out of a total of forty-seven prefectures). Within a thirty-kilometer radius of the site lie six cities with a total population of 470,000 people. Given that, the nuclear site’s disaster-relief measures, including its emergency evacuation plans, have garnered considerable attention.

“Disaster relief measures cannot be executed in a single day, but must be gradually accumulated and built up,” stated the deputy general manager. In the wake of the accident at Fukushima Daiichi NPS of the Tokyo Electric Power Co. (TEPCO), Shimane Prefecture adopted measures to deal with a nuclear accident at an early stage.

On the assumption of “in-place evacuation” (i.e., sheltering indoors), hospitals in the vicinity of the Shimane NPPs have been given radiological protection capabilities, including the sealing of gaps around windows and maintaining plentiful stocks of filters for filtering out radioactive substances. Radiation monitoring posts have been installed within a thirty-kilometer radius around the NPPs to monitor radiation levels at all times, with data available on the prefecture’s website.

Chugoku Electric Power is now training more than three thousand people as so-called “nuclear emergency personnel.” In the event of a major earthquake or tsunami that might significantly affect the Shimane NPPs, its employees at the site and those working at nearby offices would mostly likely be preoccupied with the maintenance and/or restoration of the area’s electricity supplies.

For that reason, the people being trained as nuclear emergency personnel are those employees usually working in the Sanyo region—which includes Hiroshima, Okayama and Yamaguchi Prefectures along Japan’s Inland Sea—so that they can respond to nuclear disasters, including conducting inspections at the time of temporary evacuations. Chugoku Electric Power is thus building a flexible system to respond to emergency situations.

The reporters who visited the NPPs for this article saw first-hand its steady efforts to implement proper safety measures. They realized that the people working there had all adopted the laudable attitude of tackling every issue carefully toward the facility’s restart.

At present, about ninety percent of the total generated electricity in the service area comes from thermal power (mainly coal). The longer Shimane NPPs’ restart is delayed, the greater the area’s dependency on aged thermal power plants becomes. The progress of the NRA’s compatibility examination of the plants will thus be keenly watched.