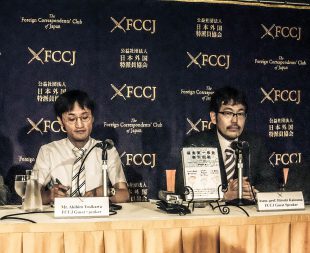 At the FCCJ press conference, Kainuma also expressed his intention to conduct an independent investigation and research project for the purpose of “visualizing” the decommissioning at Fukushima Daiichi, and to deliver the results overseas as well.

Kainuma was joined on the rostrum at the press conference by Akihiro Yoshikawa (left), representative director of Appreciate Fukushima Workers (AFW). Yoshikawa, who has worked at both the Fukushima Daiichi and Daini Nuclear Power Plants, is engaged in supporting studies by local residents and students based on his own visits to the affected area.

Beginning his presentation by showing photographs taken by a Malaysian photographer showing Fukushima as desolate and devastated, Kainuma asked the reporters in the audience, “Is this really how it is?”

He noted that employees in Okuma Town are now finding it easier to get housing, while companies involved in the decommissioning are finding offices more easily as well. He also said that problems in people’s daily lives, more than five years since the accident, tend to be the routine ones of traffic congestion and garbage disposal. Because of that, he told the attending domestic and foreign reporters that it was “time to update recognition” of the realities at Fukushima

Kainuma went on to express his concern that “only sensational news is being reported.” In explaining why he compiled the “Encyclopedia of the Fukushima Daiichi NPPs Decommissioning,” published last month, he said that when the public hears the word “decommissioning,” they first think of the hydrogen explosions. He said he wanted to “share the reality as it is,” and then “support those who will engage in the decommissioning.”

In an effort to make the subject more easy to understand, like an encyclopedia, Kainuma included cartoons and quizzes in his explanations. He said that it was the first book on the Fukushima Daiichi accident that “looks at the people living around the NPPs, not just engineering and technical issues.”

Kainuma’s next project following the publication of the encyclopedia—namely, independent investigation and research on the Fukushima Daiichi NPPs decommissioning—will be based on three principles:

He said that the full investigation would be done through field visits and similar activities, and that the results would be widely disseminated.

When asked by a reporter about funding for the project, Kainuma said that supporters had already emerged via Internet cloud funding. He added that he would consider translating the encyclopedia into English if successful beyond the initial target.