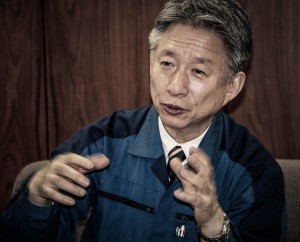 JAIF: We understand that the Fukushima Reconstruction Headquarters was moved to Tomioka Town to increase the opportunities to meet local residents and to deepen ties with them.

Mr. Ishizaki: Yes. On March 7, the headquarters moved from J-Village to Tomioka Town. Tomioka Town itself is still under an evacuation order. We thought that it would mean a lot to have TEPCO employees in company uniforms being seen actively engaged in various work ahead of the return of residents to areas where they are currently only allowed to be during the daytime. Walking in the town, we would occasionally meet residents and exchange greetings with them. There must have been bad feelings toward TEPCO because of the accident, but if the residents see its employees working hard for them, that might help. That was part of why we did it.
There is a salon in front of a major commercial facility—currently closed—where people like to gather and talk. TEPCO employees, always in their uniforms, make a point of going there, apologizing for the accident, and listening to people’s opinions. In my New Year’s message, I told our employees that this year’s keywords were “interaction” and “connection.” I think that the significance of moving the headquarters, making it a “base at the front,” so to speak, is that it allows us to practice exactly that.

JAIF: The headquarters already does a great deal in terms of contributing manpower to local efforts, volunteering help, visiting house-by-house to ask if anything is needed, and so on.

Mr. Ishizaki: Yes. Nevertheless, I believe that residents still have complicated feelings toward TEPCO. They know the town had grown and prospered with the Fukushima Daiichi Nuclear Power Plants, but they are also angry that the NPPs caused the accident and disrupted their lives. Those feelings will not be reconciled easily.
Fully aware of that, we think that there is no other way to restore trust in TEPCO than to act with complete sincerity. Our attitude is: “We want to live and work and prosper with you. Please let us do so.” One such opportunity—just as you said in your question—is to contribute manpower to local efforts, such as carrying out weeding together with local residents. While sweating together, we hear their stories of hardship and cannot help feeling that we, ourselves, should be able to do more. That is just one point for us along a path. We will have to continue steadily.
In September 2015, the evacuation order was lifted for Naraha Town. Since then, a pair of employees has been visiting residents’ homes. I make sure that they report to me each time on how many households they visited. Recently, the numbers were decreasing, so I asked why. At the beginning, they said, they were often refused at the door: “We want nothing from you.” In time, after repeated attempts, they might be invited in for tea, and end up talking three or four hours. Naturally they visited fewer houses that way. Obviously, building relationships is more important than simple numbers.
30 years ago, a JAL plane crashed on Mt. Osutaka (in Gunma Prefecture, Japan). When the victims’ families climb the mountain each year to commemorate the accident and comfort the souls of those lost, JAL employees climb with them. The airline addresses the importance of doing so in its employee-training seminars. TEPCO caused the Fukushima Daiichi accident. Not only must we compensate the residents and decommission the plant and do all the necessary technical things—we must stand as one with the people whose suffering the accident caused. Rebuilding trust and restoring confidence will occur one person at a time. Although we were responsible for the accident, our wish is that they accept our working with them and regard us as their partners, facing in the same direction. The existence of the Fukushima Reconstruction Headquarters will be validated when people believe that they are happy to have TEPCO employees in the region after all is said and done.

JAIF: On March 11 of this year, you talked to employees about the TEPCO Group’s “total strength.” How is that being applied to the reconstruction of living conditions in the affected areas?

Mr. Ishizaki: When evacuation orders in Fukushima are lifted, it is important that circumstances exist that allow people to actually return. In that respect, TEPCO will certainly fulfill its responsibilities. Neither the national government nor the prefecture—and not even the municipalities—each with broader responsibilities, can get as close to the affected individuals as people from TEPCO can.
In addition to the “work” that I have talked about, each of our employees gives personally, with his or her own skills and talents, to the people coming back to live in their hometowns. That is part of the TEPCO Group’s total strength. I myself, for example, intend to practice my hobby, aikido, with returned children. Employees who play soccer may coach people in the sport or conduct classes. There are many possibilities. I hope the full use of TEPCO’s resources will contribute, in small and large ways, to redeveloping the town and returning “normal life” to the people.

JAIF: What are the issues you see for Fukushima now?

Mr. Ishizaki: Nearly 20,000 people, including many from overseas, have visited the Fukushima Daiichi NPPs for a variety of reasons. We try to show them the recovery efforts in the nearby towns as a reminder of what really happened, to keep memories of the disaster alive. Fukushima is now suffering from “fading disaster memories” and “harmful misinformation.” Not only the political authorities—national, prefectural, local—but TEPCO, too, needs to be concerned with remembering events accurately. If visitors can personally see the area, they will understand in a way not possible through media reporting, and possibly be inspired to find something that they can do to help.
As for “harmful misinformation,” I don’t think buying food from Fukushima out of a spirit of “wanting to help” will continue very long. I think buying food from Fukushima will continue if people think that the food is good. That’s what we have to focus on. In November 2014, the Fukushima Reconstruction Headquarters launched the “Network of Companies Supporting Fukushima.” It has grown from 11 to 22 participating companies with 300,000 employees, working out to one million people if you include their families. If, as a result of the network, more people eat foods produced in Fukushima and find them to be tasty, they may want to visit Fukushima, which may lead to even more visits. Those are the kinds of “virtuous circles” we should strive for.

JAIF: Do you have any message for your younger employees?

Mr. Ishizaki: Starting two years ago, TEPCO has tried to hire around one-tenth of its new employees from among the graduates of schools in Fukushima Prefecture. Looking at those employees, I see that they have a high level of ambition and are already stimulating employees who are their seniors. I am sure that they will be successful, and that our younger employees will gain a more general understanding of about Fukushima reconstruction. Meanwhile, with the shift at TEPCO to a holding-company structure, we have created Fukushima Reconstruction Promotion Office within each of the three subsidiaries in order to more effectively carry out the relevant responsibilities. Through a combination of evoking awareness and mechanism, it is important to continue the spirit of reconstructing Fukushima, not just on the part of such young employees but by all the employees at the company.