On July 1, Japan’s Strategic Policy Committee, under the Advisory Committee for Natural Resources and Energy, met for the first time in six months to exchange views and opinions on recent trends in energy. The committee is chaired by Sadayuki Sakakibara, who formerly served as president and chairman of Toray Industries, Inc. 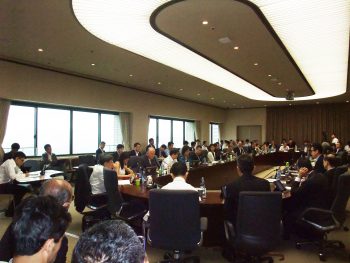 Prior to the G20 Summit in Osaka, which ended on June 29, the G20 Ministerial Meeting on Energy Transitions and Global Environment for Sustainable Growth was held on June 15 and 16 in Karuizawa, Nagano Prefecture.

At the July 1 committee meeting, a representative from the Agency for Natural Resources & Energy (ANRE), under Japan’s Ministry of Economy, Trade and Industry (METI), reported that the aforementioned G20 ministerial meeting had come to an agreement on the importance of accelerating the “virtuous cycle” of environmental protection and economic growth via an energy shift.

Recent trends and changes regarding energy security and energy geopolitics were separated into the categories of supply-and-demand structure, geopolitical risks, environmental recognition, technology, and Japan’s stance. Committee members were then asked for their thoughts on each issue.

The ANRE representatives at the meeting cited various examples of recent global issues affecting the supply-and-demand structure and geopolitical risks, including the new status of the United States as a net exporter of energy, and the heightened tensions in the Middle East.

One committee member, President Jitsuro Terashima of the Japan Research Institute, said that while four-fifths of Japan’s oil imports and one-fourth of its LNG imports still came via the Strait of Hormuz, not a single drop of oil headed to the United States was passing through the strait anymore. That, he said, reflected a major difference in the two countries’ approaches. He then emphasized the need for Japan to consider a new energy strategy.

Another member, attending the committee meeting for the first time, was Tatsuji Sugimoto, who had just become governor of Fukui Prefecture in April. Referring to the Fifth Strategic Energy Plan issued last summer, he said that the government was doing nothing toward the realization of its goal of expanding the nuclear share within the national energy mix by FY30 (April 2030 to March 2031) to 20-22 percent, as well as doing nothing toward extending reactor operation beyond four decades.

He added that the issues of spent fuel and the nuclear fuel cycle appeared also to have been “left untouched,” criticizing the government’s attitude toward nuclear policy.

The governor also referred to such subjects as: (1) the promotion of public-understanding activities, (2) the recent decline in the number of nuclear-related subjects being taught at the nation’s universities, (3) the continued long-term suspension of reactor operation nationwide, and (4) trends toward reactor decommissioning.

He also asked the national government to assist in efforts to develop human resources, with an eye on the future, and to expand the economic development of nuclear siting regions.

At the G20 Ministerial Meeting on Energy Transitions and Global Environment for Sustainable Growth, mentioned above, participants had discussed matters related to high-level radioactive waste (HLW). Given that the realization of final HLW disposal is an issue shared by all countries utilizing nuclear power, they decided to establish an international roundtable on the subject, the first of which will be held in mid-October in Paris, with cooperation from the OECD/NEA.

Finally, Hiroya Masuda, professor in the Graduate School of Public Policy at the University of Tokyo—and previous chair of the Radioactive Waste Working Group under the Advisory Committee for Natural Resources and Energy—said that it would soon be two years since the first issuance of the color-coded “map of scientific features,” which objectively shows the suitability of various as HLW disposal sites.

Stressing the need to begin specific study groups, Masuda also voiced his belief that internationally sharing information at the roundtable could be a key to the solution.