Students Battle in Contest of Robots to Remove Fuel Debris

On December 15, sixteen teams competed in the third Robot Contest (Hairo Sozo Robocon) for students at Japanese colleges of technology (kosen), held at the Japan Atomic Energy Agency’s Naraha Remote Technology Development Center in Naraha Town, Fukushima Prefecture. It was sponsored by the Ministry of Education, Culture, Sports, Science and Technology (MEXT) and the Council for Cooperation among Colleges of Technology on Decommissioning Human Resource Development. 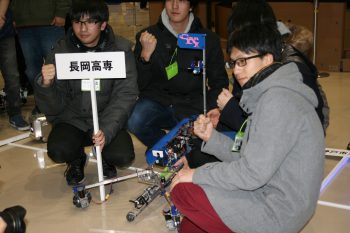 The Robot Contest has been staged every year to heighten people’s interest in the decommissioning of Fukushima Daiichi Nuclear Power Plants. This year, a difficult theme was chosen in anticipation of removal of fuel debris from the plants, and all teams found it quite challenging.

The robot “Can D I,” belonging to a team from the National Institute of Technology, Nagaoka College (NITNC), performed exceptionally and came away with the first prize, the MEXT Minister’s Award. A foreign team—from the University of Technology Malaysia (UTM)—officially participated in the contest for the first time.

At the start of the contest, representing the sponsor, President Osamu Yamashita of the National Institute of Technology (NIT), Fukushima College—who also presides over the Council for Cooperation among Colleges of Technology on Decommissioning Human Resource Development—told the students, “Exert your creativity, identifying critical points, resolving the issues, refining your capabilities, and achieving results.”

He especially welcomed the participation by the Malaysian team, voicing his hope hoped that the contest would become a place where common challenges could be taken up internationally.

Next, Upper House Diet Member Teruhiko Mashiko, who belongs to the Liberal Democratic Party (LDP) and comes from Fukushima Prefecture, expressed his expectations that the students would work in the field in the future. Talking about back-end issues overseas, he referred to his experiences visiting the Zion NPPs (PWRs) in Illinois (United States) and the Sellafield MOX Plant (SMP) in the UK.

“There is need,” Mashiko said, “to input an array of technological resources for such things as final disposal sites, and there are bound to be many difficulties ahead. I hope that all of you contribute to the cause of decommissioning around the world.” 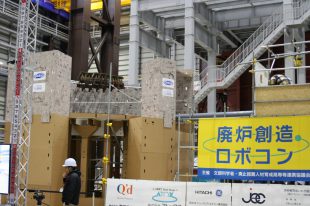 The theme of the contest was removing fuel debris from the lower part of a pedestal (representing an open space under a reactor pressure vessel). With only ten minutes to finish the task, the teams were required to have their robots pass through a pipe (4m long, 240mm inner diameter), land on a grating on the mock-up pedestal, retrieve a ball 3.2m below, and move it outside the pedestal.

Further site-related conditions were as follows:

All teams struggled to succeed. Typically, their robots found it impossible to get through the pipe. And even if the robots did get through, the means for retrieving the ball often detached inside the pedestal, making it inoperable. 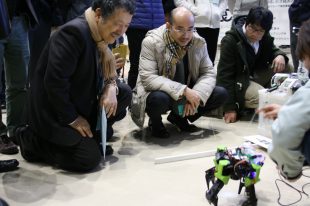 After the competition, Director Koji Okamoto of the Collaborative Laboratories for Advanced Decommissioning Science Center (left) watches a demonstration of a robot.

In his closing address, President Tetsuji Chohji of the National Institute of Technology(NIT), Kagoshima College, who led the Robot Contest Executive Committee, praised the students for their efforts and determination. He told them, “The decommissioning of the Fukushima Daiichi NPPs will take a very long time, continuing into your generation. Now is just the beginning.” He said that the contest would lead to solutions to difficult problems.