Symposium in Tokyo Looks at Taiwanese Energy Situation, and Discusses Fear and Misinformation about Foods Sourced in Fukushima

On September 5, a symposium held at the Ookayama Campus of the Tokyo Institute of Technology, co-sponsored by the university and the Fukushima Innovation Coast Framework Promotion Organization (FIPO), included discussions about the energy situation in Taiwan, with Taiwanese university students participating along with President Lee Min of the Chung Hwa Nuclear Society (CHNS). The participants then looked at the issue of the role of nuclear energy in power supplies and environmental protection, as well as the reconstruction of Fukushima. 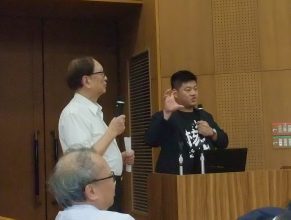 In August 2017, Taiwan, which is now proceeding with a nuclear phaseout policy, experienced a major power failure that affected almost half of the households in the country.

Meanwhile, the following year, a massive blackout hit the whole of Hokkaido in September 6, 2018, due to a 6.6-magnitude earthquake striking the southern part of the island. Incidentally, the earthquake occurred when all units at the Tomari Nuclear Power Plants of the Hokkaido Electric Power Co. were suspended to deal with requirements under Japan’s new regulatory standards.

In his comments at the symposium’s opening, President Shigeaki Okajima of the Atomic Energy Society of Japan (AESJ) said that it was important for both Japan and Taiwan to consider the positioning of nuclear power among energy sources. He then referred to Taiwan’s continuing restrictions on the import of foods from Fukushima and four other prefectures, adding that it was necessary for the country to understand “the actual situation” in Fukushima based on accurate science.

Next, CHNS President Lee Min, a nuclear engineering professor at National Tsing Hua University, talked about power challenges in Taiwan. He pointed out that in 2017, nuclear power accounted for less than ten percent of total generated electricity in Taiwan for the first time in a while, emphasizing that it had nothing to do with technological issues.

Lee also said that nuclear power in Taiwan had been affected by changes in the country’s government, and that the suspended construction of the Lungmen-4 NPP was representative of that. Looking back on the 2017 blackout, he said that the country’s capacity reserve margin immediately prior had been 3.17 percent, describing the situation as “very severe.”

Finally, referring to worsening air contamination in Taiwan, he stressed the importance of nuclear power’s contribution to environmental protection efforts. “Go green with nuclear,” he concluded.

Another speaker was one of the Taiwanese students who had visited Fukushima from September 2 to 4 with Professor Lee. Liao Yenpeng, currently studying medicine at Kyoto University in Japan, observed the inspection of flounder caught 10km offshore from the Fukushima Daiichi NPS, and saw that no cesium was detected in them. Based on that, he stressed that Taiwanese people misunderstood the reality of foods from Fukushima. “It is important to convey the facts,” he said.

Liao further noted the importance of communication, referring to his participation in a campaign of street speeches and signature collection for a referendum held in Taiwan in November 2018. The referendum resulted in the removal of a provision from the Electricity Act related to the phaseout.

The symposium also saw presentations by various people, one of whom was Director Shigeyuki Koide of the Japanese Association of Science and Technology Journalists (JASTJ), who advocates the theme of national security of energy as a communication-related lesson that can be learned from the March 2011 accident at the Fukushima Daiichi NPS. Based on his experience with gathering information overseas, he said that it was an issue common to all countries.

Another speaker was Specially Appointed Professor Tadashi Narabayashi of the Tokyo Institute of Technology, who spoke on the effects of global warming and the limits of renewable energies.