On October 17, a two-day symposium opened at the Wakasa Wan Energy Research Center in Tsuruga City, Fukui Prefecture, to discuss expectations for the test and research reactors that will contribute to nuclear research and human resource development. 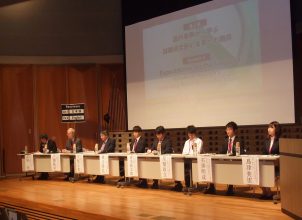 On October 17, a two-day symposium opened at the Wakasa Wan Energy Research Center in Tsuruga City, Fukui Prefecture, to discuss expectations for the test and research reactors that will contribute to nuclear research and human resource development.

With new test and research reactors planned at the site of the prototype fast breeder reactor (FBR) Monju, owned by the Japan Atomic Energy Agency (JAEA), but slated to be decommissioned, the symposium was sponsored by the Ministry of Education, Culture, Sports, Science and Technology (MEXT), which is working toward the start of detailed designing in FY22, which begins in April 2022.

For two days, symposium participants discussed such issues as the needs of industry, academia and research institutions, as well as coprosperity with the Monju siting area. The results are expected to contribute to further discussions in the future.

In his opening greeting, Fukui Prefecture Deputy Governor Hiroshi Sakuramoto  acknowledged that the decommissioning of nuclear power plants (NPPs) in his prefecture would proceed, while emphasizing the transportation potential within the Kansai region of the southern part of the Fukui, known as the Reinan area.

Among other things, he referred to the extension of the Hokuriku Shinkansen Line in three years and the vitality of Tsuruga Port. He also talked enthusiastically about generating momentum in the use of research and test reactors for the further growth of the region.

Next to speak was Professor Mitsuru Uesaka of the Nuclear Professional School, Department of Bioengineering, School of Engineering, University of Tokyo, who gave a keynote presentation outlining planned research and test reactors. He said that research and test reactors, besides their use in basic and applied studies with neutrons, and such industrial uses as making radioisotopes for nuclear medicine, were essential for the development of nuclear human resources for the future, emphasizing their role in education and training situations.

Also to speak was Professor Yuji Kawabata of the Institute for Integrated Radiation and Nuclear Science, Kyoto University, who talked to the symposium attendees about the current uses of the Kyoto University Research Reactor (KUR) and the Kyoto University Critical Assembly (KUCA), both restarted in 2017, and connections with siting areas through the Kansai Innovation International Strategic Comprehensive Special Zone and the Kumatori Atom Science Park Plan.

Kawabata also introduced diverse examples on research results based on neutron imaging. Visualization of moisture behavior, he said, enabled analysis of the phenomenon known as “concrete rupture” stemming from sudden high-temperature heating, which happened during the 9-11 terrorist attacks in the United States in 2001. He also cited its use in the development of fuel cells, suggesting the possibility of wide-ranging industrial applications. 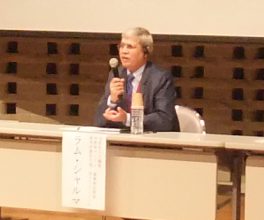 Ram Sharma of the IAEA introduces his agency’s International Centre based on Research Reactors (ICERR) scheme for multilateral joint activities, saying, “It is important for research reactors to be useful for international education and training.”

The Fukui University of Technology’s Aoki, who has undertaken practical training at the KUR in Kyoto, described the unforgettable nature of actually seeing Cherenkov light. Fukui University’s Watanabe, who is studying the design of molten salt reactors, spoke of his interest in SMRs, and enthusiastically expressed his desire to study abroad. Meanwhile, Kindai University’s Shimazu, who has experience actually operating a nuclear reactor in South Korea, spoke of the interest in the Japanese nuclear industry by Korean students, thus stressing the importance of developing contacts and networks overseas through test and research reactors.

Professor Masayoshi Uno of Fukui University’s Research Institute of Nuclear Engineering then spoke to the participants, focusing on undergraduate education at the Tsuruga Campus of his university, particularly nuclear education. He said that new test and research reactors would enable many kinds of research, including practical training for students. He then fielded a question from the floor about the potential cooperation between industry and university.

On the second day of the symposium, discussions continued with representatives from several private companies and overseas universities, focusing on such matters as contributions to society.