The JAIF-KAIF Seminar held on October 16 recognized the concerns of the South Korean nuclear industry and academic community about President Moon Jae-in's policy of phasing out nuclear power that was announced in June. That country's nuclear industry has taken the initiative in objecting to the decision, which it says will adversely affect employment and sales, including nuclear-related export opportunities. 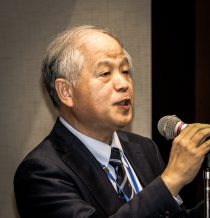 Similarly, in Taiwan, the Tsai Ing-wen government enacted a revised law in January stipulating the elimination of nuclear power by 2025. The industry there has asked the government to review its energy policy in consideration of the need for stable supplies of electric power.

Both countries depend on imports for most of their energy resources—as does Japan—and similarly face the issues of the “three E’s” (energy security, economy and environmental protection).

Nuclear power accounts for thirty percent of the total amount of generated electricity in South Korea, and sixteen percent in Taiwan, while the corresponding percentages for coal are forty-three percent and forty-nine percent, respectively, both of which are high figures.

By 2030, South Korea aims to cut its greenhouse gas (GHG) emissions thirty-seven percent from 2005 levels, with Taiwan targeting a twenty-percent reduction. Both countries seek to expand their use of renewable energies, but many challenges remain. It is difficult to reduce GHG emissions while retreating from nuclear power.

The effect of power-rate increases on the overall economy of South Korea is also a concern. According to trial calculations by the Korea Energy Economics Institute (KEEI), if the share of renewable energies climbs to twenty percent and that of LNG also goes up, with those of nuclear power and coal reduced, power generation costs will rise twenty-one percent from 2016 to 2030, with prices increasing by 1.16 percent and GDP declining by 0.93 percent.

Although the Moon government is expected to announce a new long-term electricity supply and demand plan before the year ends, it is unclear how it will be able to realize its policy of phasing out nuclear energy.

Meanwhile, a massive power blackout this past August highlighted Taiwan’s diminished marginal capacity. Partly due to the suspension of operations at nuclear power plants (NPPs) and delays in construction of natural gas-fired plants, Taiwan’s reserve margin, which was nearly twenty-five percent in 2010, declined to just ten percent last year.

This past summer, Taiwan’s marginal capacity fell below five percent, and averaged only 2.4 percent (1.72 percent at its lowest) in the week before the blackout—that is, some eight to ten percent lower than what is considered reasonable. Ensuring a stable supply of electricity is thus an issue in that country.

South Korea and Taiwan are not connected to overseas power grids, just as the case of Japan. Nuclear power thus continues to have a significant role to play in all three countries, not only from the viewpoint of stable energy supplies, but also from those of economic efficiency and environmental compatibility.

Taiwan has changed its policy direction toward the elimination of nuclear power, and the people of South Korea are discussing their new government’s policy of phasing it out. The nuclear accident at the Fukushima Daiichi NPPs has fueled concerns of quite a few people about nuclear safety. As the party responsible for the accident, Japan has a duty to share information on the state of progress of decommissioning at Fukushima Daiichi, along with the reconstruction of the prefecture and the safety of foods produced there, to alleviate anxieties in neighboring countries and the international community as a whole.

South Korea and Taiwan, just like the rest of the world, are watching Japan as it restarts its NPPs. The Japanese nuclear industry must recover the confidence of those countries through steady progress on resuming NPP operation nationwide, as well as by chalking up a record of safe operation there.

We at JAIF will continue our endeavor to disseminate information at home in Japan as well as internationally in order to restore confidence in nuclear power.