On November 13, the Japan Atomic Energy Agency (JAEA) held an annual report conference in Tokyo, reporting on recent research results. Those included safety research using its NSRR (Nuclear Safety Research Reactor), which resumed operation in June, as well as activities to restore the environment in Fukushima. 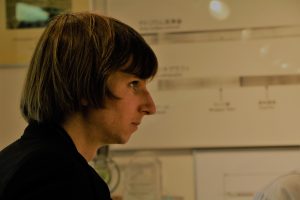 Also featured was a presentation by Taylor Wilson, a 24-year-old American nuclear physicist, who had also appeared earlier this year at the 51st JAIF Annual Conference, held on April 9 and 10.

Wilson—known as “the boy who played with fusion”—spoke of his own childhood and how he became interested in nuclear physics when he was about ten years old, conducting various experiments at home. He later established Prometheus Industries, which is working on R&D on small modular reactors (SMRs) in the several-megawatt to 100MWe class.

He cited convenience as well as safety as the main advantages of SMRs, noting that they can be manufactured as smaller modules, then transported and assembled at a site. A bit further into the future, he said that he was most interested in their application to power supply in space.

At the presentation, Wilson also talked about research on self-propelled robots, and the development of fuels and materials using nanotechnology.

From the perspective of a scientist, he said that tough challenges “rain down on humanity like meteorites,” but that human beings have the ability to meet them with their intelligence. 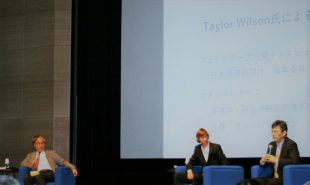 In the discussion, Taki first asked Wilson how the curiosity and abilities of children in the United States are elicited and encouraged. In response, Wilson mentioned the environment for science education in his country, saying “One way is through a variety of ‘science fairs,’ where children can ask about anything. Not only do they receive answers and explanations, but they also get to experience things hands-on, which is important.”

Asked how the United States and Japan differ in terms of their science and technology culture, Wilson said, “In Japan, people are good at jointly carrying out research together. In the United States, anything might be tried. An absurd, ‘crazy idea’ has often contributed to development of an industry.”

Yan, who has research experience in both the United States and Japan, referred to the development of the high temperature gas-cooled reactor (HTTR). He said that while Japan has good research facilities and talent, it is also important to keep an open environment for conducting research that draws people’s attention and generates ongoing motivation.