“The Boy Who Played with Fusion” Interview with Taylor Wilson

Taylor Wilson (photo), a 23-year-old physics genius from the United States, came to Japan to make a special presentation at the 51st JAIF Annual Conference, which opened on April 9. His story is well known: enchanted by science since he was a young boy, he achieved nuclear fusion in an experiment in his family’s garage at the age of fourteen. In person, at first glance, Wilson appears delicate and meek. In his presentation at the JAIF Annual Conference, he spoke fervently about his activities in science and technology, along with his hopes for improving lives around the world. 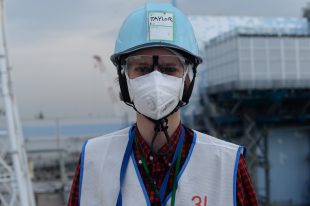 His description of a bright future for nuclear technology, combined with his evident passion in foreseeing new nuclear applications in new fields—beyond medicine, energy and space—have excited many people and attracted private funding. At Prometheus Industries, which he established, he is currently working on the development a small, passively-safe nuclear battery (i.e., a nuclear reactor). We interviewed him to seek details on his current activities and plans. Wilson’s comments are summarized below:

Young people account for ninety percent of our team

“Eighty percent of our work is on the development of nuclear reactors. Funding comes mostly from private sources, such as venture capital firms. For our academic R&D activities, including those on radiation biology and material chemistry, we receive subsidies from the government. Most of our academic activities are still at the R&D stage, and any profits at that point are re-invested in R&D.”

“The people on our team, all interested in nuclear science, come from various backgrounds. Young people who have just graduated from college or graduate school and have new ideas now account for ninety percent of our staff. The other ten percent had careers and experience in the nuclear industry, with some coming from such industries as aerospace. I think that the composition is suitable for the team I manage. In all, there are just forty staff members for all the projects here, including the production of medical radioisotopes and nuclear reactor designing and development. That number may increase as reactor development nears the test-bed and experimental-reactor stages.”

Experimental reactor to be developed by 2020

“We expect to get USD600 million in investment funds to develop an experimental reactor, and are hoping for a 1:1 public-private partnership. If USD250-300 million of that can be raised privately, we hope that the government will invest the same amount. The target now is to finalize the design of an experimental reactor. Our approach is to design a subsystem, test and improve it, and then to repeat the process. By 2020, we hope to begin experimenting on a compact heat exchanger and ceramic core without using nuclear fuel. We plan to load real nuclear fuel a year later. If a reactor is to be used for specific purposes, such as a space probe needing an output of 15MW, our demonstration reactor will be 1.5MW.”

“In the 1950’s, people used to be excited by the promise of nuclear energy, as it was going to secure the future. Many wanted to work in the field back then, but not so much today, given what happened at Three Mile Island, Chernobyl and Fukushima. The cooling of the excitement has affected the human resource pipeline in the nuclear industry: not just in Japan, but everywhere.”

“Personally, I think that if a thrilling, attractive project is put forward to young people, they will respond to it. That means innovation. It means convincing them that the industry is progressive. I think that the nuclear industry and community should make facilities and research activities open to the public, especially the young. People who have never visited a nuclear power plant (NPP) nevertheless have already formed images in their minds, ideas about its safety and other things—but they are often erroneous. If they get the chance to visit and see a plant for themselves, they might decide it’s a place they would like to work at. Opening facilities to the public is one of the best ways to educate, enlighten and inspire, I think.”

“Radioactive waste disposal is the biggest challenge in using nuclear technology. Technical solutions are already available, but so far people and society don’t accept them. Two points are key. First, a strategy for development of a final disposal site is absolutely necessary. Second, the process must be carried out with local consent. In Finland, work to construct the world’s first permanent disposal site is going well. The process is transparent, with a veto given to the local government. In the United States, however, the Yucca Mountain project in Nevada has come to a halt. From it, we learned valuable lessons on a waste management policy. For any project, the local state must not be forced into siting, and transparency must be ensured.”

“We must also recognize that technologies and societies change over the long term. Personally, I think it is better to manage waste at interim storage facilities rather than in final repositories, and then to monitor safety and accommodate any changes. Given that radiation levels decline relatively quickly, waste after some hundreds or thousands of years can be reprocessed, or long-lived nuclides can be subject to transmutation. In that way, I think that waste will eventually end up as almost nothing.”

“In contrast, final disposal facilities, as now conceived, are based on an assumed span of a million years. We must consider what the end-stage would actually be like, and, accordingly, the required or appropriate design for that. A million years is longer than modern humans have existed on Earth. What will have changed a million years from now? That cannot be foreseen. I myself am very interested in the technology of nuclear transmutation. I think Japan, for example, will become able to transmute long-lived nuclides for itself and for other countries.”

“By the middle of this century, the way that energy is produced, distributed and used will have changed considerably. Currently, power generated by nuclear fission, renewable energies and the like are our base-load power sources. By 2050 or 2060, nuclear fusion will be the reality and part of the power-source mix. Technologically, I have little doubt of that. It is not yet clear, however, which method will be the best, and there is still uncertainty about economic efficiency and other things.”

“In comparison with fission, fusion generates almost no waste and fuel costs are lower—both of which are advantages. Moreover, a few thousand more years of civilization will deplete uranium supplies, even with reprocessing. Even if electricity storage becomes possible, fusion will be needed as a backup for base-load renewable energy. Along with changes to the generation of electricity, there will be great changes in its usage. Transportation, for example, may become totally electric. The need for highly reliable electric power will increase, and only fusion has the potential as a base-load or backup source over the long term.”