On August 3, the closing ceremony of the 2017 Japan-IAEA Joint Nuclear Energy Management (NEM) School, designed to foster nuclear management capabilities among the next generation of young professionals in countries planning to introduce nuclear power, was held at the University of Tokyo. 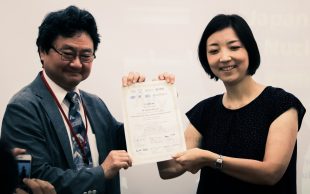 Opened on July 18 with thirty-five participants from seventeen countries around the world, the program included lectures, group discussions and technical tours of the Fukushima Daiichi and Daini Nuclear Power Plants (NPPs).

At the closing ceremony, each participant was given a diploma signifying his or her completion of the course. Closing remarks were then made by University of Tokyo Professor Mitsuru Uesaka, who serves as chairman of the NEM School Executive Committee, along with President Akio Takahashi of the Japan Atomic Industrial Forum (JAIF), who chairs the operating committee of JN-HRD Net and concurrently serves as president of the JAIF International Cooperation Center (JICC).

In their remarks, they called on the graduates to be the leaders of their generation in the nuclear industry, while also urging them to make full use of what they had learned at the NEM School, particularly on visits to the Fukushima Daiichi and Daini NPPs, and the networks they had formed through the NEM school.

Representing the IAEA, Mikhail Chudakov, deputy director general and head of its Department of Nuclear Energy, sent a video message in which he said, “In this program, participants visited the Fukushima Daiichi and Daini NPPs, and were given other valuable experiences. For them, however, the NEM School was just a starting point. I expect them to be active as next-generation leaders of an industry delivering safe, inexpensive, and clean energy that can mitigate the effects of global warming.”

Hiroya Hirose, also from the IAEA’s Department of Nuclear Energy, echoed that, saying, “I believe that the visits to the Fukushima Daiichi and Daini NPPs were indeed very good experiences for all the participants.”

The participants also made several comments about their experience, including one person who said, “I want to share what I actually saw in Fukushima: the progress in decommissioning the Fukushima Daiichi and the recovery of Fukushima Prefecture.” Another person said, “I want to continue communicating with the other participants, making use of their experiences, too, in my career.”

After the closing ceremony, four parties—the IAEA, JAIF, the Japan Atomic Energy Agency (JAEA) and JICC—signed an agreement on implementing cooperation in human resource development (HRD), including the development of teaching materials and the sharing of educational programs.