On November 3 and 4, a “Science Cafe” was staged at the Setagaya Campus of Tokyo City University, at which representatives of nuclear-related companies and organizations in Japan exhibited robots, explained them via panels, and conversed with visitors. The “Science Cafe” has been held annually in coordination with the university’s campus festival. 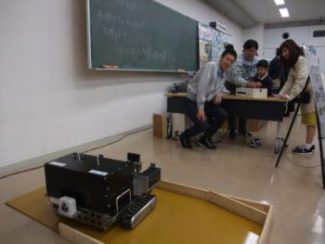 GEH demonstrated its technological capabilities with hands-on exhibitions of PMORPH—a remotely-controlled, shape-changing robot used to investigate the insides of RCVs at the Fukushima Daiichi NPPs—and a virtual reality (VR) simulator of the central control room at a nuclear power plants.

In addition, NUMO displayed a so-called Map of Scientific Features at the Science Café toward the geological disposal of high-level radioactive waste (HLW). Representatives of the organization answered questions from visitors, hoping to get their understanding on the country’s HLW disposal project.

Sponsored by Tokyo City University’s Radiation Measurement Laboratory, the Science Café has been held every year since 2015 to give people a better understanding of nuclear energy and radiation while they relax and enjoy a cup of coffee. Some people said that the café taught them how radiation was useful in their lives, and that they were drawn by the reputation of the café on campus—its having received the university’s prestigious President’s Award. 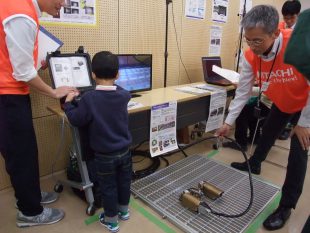 Visitors were able to experience the operation of PMORPH, a robot used to investigate the interior of the reactor containment vessels (RCVs) at the Fukushima Daiichi NPS. 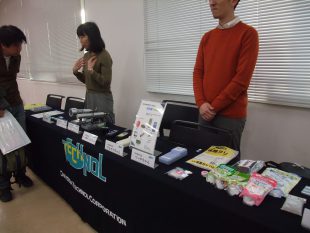 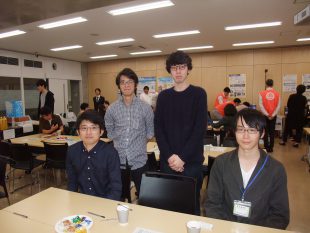 Fumiaki Takasaki, and (from right) Ryosuke Miura, Arihiro Sekiya and Kota Kitazono. All graduates of the same class, they ran the Science Café this year.

Fumiaki Takasaki, in his first year at Tokyo City University’s Graduate School of Integrative Science and Engineering and representative of the executive committee of the Science Café, said, “Although ordinary people have been saturated with sensational reports about the accident at Fukushima Daiichi, they know little about steady activities and technological developments in the field.”

He thus emphasized the significance of having members of the public come to the university’s Setagaya Festival to see and experience for themselves the realities of the accident.

Last year, when he enrolled in the university’s Nuclear Safety Engineering program, Takasaki appeared in the video series featured by the Japan Atomic Industrial Forum (JAIF) on its website. His enthusiasm for going to graduate school and studying nuclear energy in more depth was evident at that time.

Demonstrating his leadership this time as the representative of the Science Café, showing visitors around the booths, Takasaki mentioned that he thought that the best way to apply what he has learned at the university would be to serve as an engineer involved in the decommissioning of the Fukushima Daiichi.