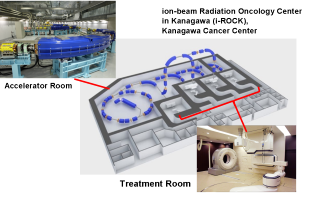 For several years, Toshiba ESS has worked closely with Japan’s National Institute of Radiological Science (NIRS), a pioneer in heavy-beam cancer therapy, and now a division of the National Institute for Quantum and Radiological Science and Technology (QST). Committing itself to R&D on cancer treatment systems, the firm applied its superconductive electromagnetic technology to the rotating gantries of existing systems, which enable irradiation from all directions, allowing them to be made smaller and lighter.

Treatment began in 2015 at the Ion-Beam Radiation Oncology Center in Kanagawa (i-ROCK), located within the Kanagawa Cancer Center of the Kanagawa Prefectural Hospital Organization. It is the fifth such facility built in Japan.

According to information released by the three parties on June 11, they had been working to resolve various issues in oncology treatment using i-ROCK, through a joint research course that they established in 2017. Their objectives included the development of a material whose color indicates the degree of irradiation, and technology to measure the 3D distribution of that irradiation.

Based on their results, they established the Toshiba ESS and Kanagawa Prefectural Hospital Organization Course for Joint Research on Heavy Particle Beam Cancer Therapy Systems in April within YNU’s Research Initiatives and Promotion Organization (RIPRO), with the aim of further upgrading the system.

The Prefectural Hospital Organization will provide actual data and specific on-site requests to YNU, while Toshiba ESS, based on its experience designing and manufacturing i-ROCK, will support research in the aspects of equipment, facilities, and controls.

All the parties will endeavor to develop more accurate irradiation technology in the future, making use of AI studies at YNU, among other activities.