On January 27, President Satoshi Tsunakawa of Toshiba Corporation met the press at the company's headquarters in Tokyo to announce that it would be making substantial changes to its nuclear power business—one of its key businesses. 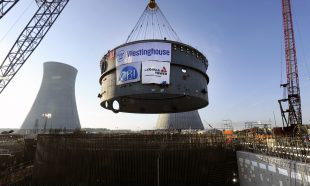 The company expects to incur a loss of as much as JPY700 billion (USD6.4 billion at USD1=JPY110) on the construction of nuclear power plants (NPPs) in the United States. Contraction of the nuclear sector, including that overseas, is clearly foreseen as the firm, reacting to the huge loss, makes a major change in its strategy. Toshiba, a storied corporation whose long history includes an important role in Japan’s nuclear policy, is at a turning point.

A negative picture began to emerge with valuation of the assets of the U.S. firm CB&I Stone & Webster, Inc.—the nuclear construction unit of CB&I—which Westinghouse Electric Company, a Toshiba subsidiary in the U.S., had acquired in December 2015. After studying its assets precisely, it was found that the company would post a loss on the order of several hundreds of billions of yen (several billion dollars).

In 2008, Westinghouse received orders for construction of four NPPs in the southern United States: two in Georgia (A.W.Vogtle-3 and -4) and two in South Carolina (V.C.Summer-2 and -3). Westinghouse, CB&I Stone and Webster were partner companies that jointly accepted the order to construct the four units.

According to Toshiba, construction costs have swollen since the accident at the Fukushima Daiichi NPPs in March 2011, owing to the imposition of stricter safety standards in the United States. Particularly, costs rose for equipment, facilities and materials to meet new standards, with construction periods also being extended, leading to higher personnel costs. Total construction costs rose to substantially more than what had been expected at the time the orders were accepted.

According to the initial plans, the construction was originally expected to last five years. At present, the commissioning of all four units has been delayed by one to three years (currently projected for 2019 to 2020). With construction about 30% complete, the combined construction costs for the four NPPs have already reached JPY2 trillion (USD18.1 billion).

Toshiba President Tsunakawa explicitly declared that “positioning nuclear power as the core of our energy business will change.” He also clearly stated that his firm would also change its business posture overseas, such as by taking a more prudent approach to obtaining new orders.

Toshiba’s nuclear business, which has been part of the company’s electric power business, will be reorganized directly under the purview of the president, providing stronger management. Maintenance and decommissioning, seen as stable and profitable, will be the core of the nuclear business, in contrast to orders that combine design, construction, maintenance and inspection. The latter activities, while potentially advantageous, also face the risk of large losses.

Tsunakawa assumed the presidency of Toshiba in June 2016 to rescue the company in the wake of a serious accounting scandal. On February 14, the firm will announce a comprehensive sum for the total losses, as well as management reconstruction measures and personnel restructuring.

Toshiba has also decided to split off its flash memory business, the major product in its semiconductor business, and hopes to raise JPY200 billion to 300 billion (USD1.8 billion to 2.7 billion) by selling a stake in the new unit.