Five years have passed since the earthquake of March 11, 2011, known in Japan as the Great East Japan Earthquake. Here are the voices of some of the people who have committed themselves to reconstruction in Fukushima Prefecture. 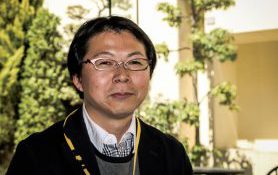 On April 10 and 11, an exhibition of decommissioning technology was staged in Iwaki City, Fukushima Prefecture, as part of the 1st International Forum on the Decommissioning of the Fukushima Daiichi Nuclear Power Plants. We interviewed Associate Professor Shigekazu Suzuki of the National Institute of Technology, Fukushima College (NIT-Fukushima), who, together with his students, explained the various panels shown at the exhibition.

JAIF: At the exhibition, five women students from NIT-Fukushima served as “explainers.” Tell us about the students at the school generally.

Dr. Suzuki: The head of the college happened to be a member of the Executive Committee of the 1st International Forum on the Decommissioning of the Fukushima Daiichi NPPs. Because of that, the Nuclear Damage Compensation and Decommissioning Facilitation Corporation (NDF) sounded us out about participating in the panel exhibition. Iwaki City, where the forum was held, is also home to NIT-Fukushima, and our program for human resource development had been adopted by the Ministry of Education, Culture, Sports, Science and Technology (MEXT), so we readily agreed to do so. We then made student internship reports a focus of the panels so that the students could present them themselves as much as possible.

The five explainers were all from Fukushima Prefecture: Iwaki and Aizu Cities, and Naraha and Hirono Towns. One of them had earlier gone to China for a sports event, where she was asked about the situation in Fukushima. She felt badly that she could not answer adequately at that time. She belonged to a humanities department—the Department of Communication and Information Science—and decided she wanted to know more, so she decided to attend a class on decommissioning. Students at NIT-Fukushima personally experienced the accident at Fukushima Daiichi, and many now want to study it properly and understand it better.

When the giant earthquake occurred on March 11, 2011, I was in the middle of a meeting to decide which of my fifth-year students were qualified to graduate. Of course, at the time, I could not imagine that the situation would develop as badly as it did. Eventually, there was no graduation ceremony that year. Some students at NIT-Fukushima had been nearly swept away by the tsunami, surviving only by holding onto pillars and the like in their homes. We can only be grateful that none of them died.

JAIF: Six years have now passed since the accident at Fukushima Daiichi. What has happened at the school?

Dr. Suzuki: We have focused on developing human resources who can engage in the decommissioning. In aspects beyond simply the site, such as environmental restoration, we hope to foster diverse human resources as well. At first we saw only the decommissioning itself. Recognizing other needs since then—such as the importance of environmental restoration—we have moved in broader, related directions.

For example, in a project to develop human resources for regional restoration, we offered advanced programs in three fields: renewable energy, nuclear safety, and disaster prevention and damage reduction. To teach the classes, we invited people specialized in those areas at universities and research institutes. The program ended at the end of FY15 (i.e., March 31, 2016), but many of the activities that arose from it continue. Regarding nuclear safety in particular—which is obviously an important topic if we are to face the challenges of decommissioning squarely—we applied, under a MEXT program, to bolster research on such matters as decommissioning and human resources. Our proposal was selected for a feasibility study in FY14, and adopted officially the following year.

In FY14, NIT-Fukushima took the lead in creating the Council for NIT Partnerships in Human Resource Development in Decommissioning Field, which consists of 120 members from NITs around the country, as well as universities, industries, and municipalities, through which research and human resource development are carried out steadily. The number of students at NIT-Fukushima is limited, but there are 51 NITs nationwide, with approximately 9,400 students in each class level. If only a small percentage of them are interested in nuclear energy and decommissioning, that total would be quite large.

JAIF: In order to capitalize on decommissioning as a new opportunity to learn, what other special efforts have you made?

Dr. Suzuki: As part of the World Intelligence Project for Nuclear Science and Technology and Human Resource Development adopted by MEXT in FY15, a contest among NITs will be held in December 2016 at the Naraha Remote Technology Development Center in Naraha Town. Specifically, it is a competition for creative decommissioning robots. NHK, the national public television network, also has been featuring a contest called the “Idea Battle: All NIT Robot Contest.“ We want the contest to really benefit society.

Normally, while in school, most students don’t have many opportunities to get away from the campus and talk with other people. At NIT-Fukushima, we think it is important for them to do so. We arrange visits to facilities and sites, as well as classes and discussions with visiting external lecturers. I often tell my students, “You don’t learn to play volleyball in the classroom. You can study the rules, but you have to touch the ball.”

Even students not particularly motivated to learn about nuclear energy may find work at the Fukushima Daiichi NPS inspiring once they appreciate the technological and scientific contexts through classes, internships and the like.

They will see many scenes of technology being used for the first time anywhere in the world. Going into a building where the conditions are completely unknown presents challenges not unlike those in space exploration. We want students studying engineering at NITs to be able to take on the challenges of decommissioning both technologically and scientifically: that is, to be able to think for themselves and make their own decisions.

JAIF: I understand that NIT-Fukushima is also willing to cooperate and collaborate with the industrial world, local municipalities, and so on.

Dr. Suzuki: Yes. We have strong connections with nuclear-related industries and organizations, including the Tokyo Electric Power Co. (TEPCO) and the Japan Atomic Energy Agency (JAEA). Each of them provides us with expert lecturers, whom we appreciate very much.

Inviting lecturers from the Ministry of the Environment, we conducted workshops on three or four issues, such as decontamination and radiation levels in food. Participants discussed issues and how to resolve them for an hour or so. At NIT-Fukushima, 40 students per class remain together for five years. Except for physical education, they do not attend classes with students from other departments. At those workshops, however, students take part from different departments. At the beginning, there was some tension among students unfamiliar with each other, but gradually they relaxed and spoke freely, and came away feeling inspired and fresh.

Fukushima Prefecture, with its commitment to supporting education, has contributed much to us over the last two years, primarily financially, and with arrangements for lecturers, locations, and the like. What was originally the Prefecture’s Decontamination Measures Division is now called the Fukushima Revitalization Center, and is in charge of visits to temporary waste storage sites, as well as risk communication classes and discussions.

JAIF: Please tell us about international activities at the school.

Dr. Suzuki: NIT-Fukushima emphasizes the fostering of human resources who are able to be globally active. Students in the humanities departments are evaluated highly for their English ability, as seen in their high TOEIC scores. We also expect engineering students to go out and gain experience overseas. Wanting to learn more about decommissioning, students increasingly study the subject at the JAEA for a week, and then train for a month at places such as the Studsvik Radwaste Co. in Sweden.

There were many participants from overseas at the International Decommissioning Forum and our students made their best efforts to explain the panel displays in English, though perhaps not always fluently. I hope that they are inspired to work harder by talking with foreigners on these kinds of occasions, and by listening to speakers at the forum, as well as learning about foreign technologies through other panel displays.

In November 2015, we concluded a memorandum on development of decommissioning human resources with Kurion Inc. of the United States, which had a panel display in the booth next to ours. In September 2015, four male students participated in Kurion’s internship program for a week in the United States, and five female students did the same in March 2016. They visited Kurion’s headquarters in Irvine, California, and its facilities in Richland, Washington, to see systems for the separation, removal, vitrification and stabilization of stabilize radioactive materials. They also observed a site where the natural environment was being restored after decommissioning. Through the good offices of the company, the students also received valuable opportunities to visit the offices of Facebook and Google. Back in Japan, those were the experiences that they sought to convey through the panel displays and via the Internet.

JAIF: What do you expect from the young people who are the future of Fukushima?

Dr. Suzuki: The students at NIT-Fukushima are sincere and diligent. They enter the school straight from junior high school. Enthusiastic about studying engineering, but without experience in it, they work hard to find the right path for themselves. I want them each to decide for themselves their careers after graduation—not be driven by others—based on their own dreams and clear information.

Personally, I hope as many students as possible will become involved in decommissioning and environmental restoration, but they have their own lives. Decommissioning is not the only thing. Still, I hope they will understand accurately what is happening and the state of the Fukushima Daiichi NPS. Seeing the site in person is reality; seeing images on the Internet is a whole different thing. Even within the prefecture, there are still many people who believe that one cannot enter the NPS without wearing a Tyvek suit and whole-face mask. In fact, workers there wear ordinary clothing in most places. Seeing the site changes your view. I think that if more young people can make their own judgments with proper knowledge after listening to those who know, the result will be the successful restoration and reconstruction of Fukushima.