With Kashiwazaki Kariwa-6 & 7 Approved, JAIF President Hopes Other BWRs Will Get the Green Light, Too

On January 25, President Akio Takahashi of the Japan Atomic Industrial Forum (JAIF) held one his regular press briefings. He began by referring to his written comments released last December 27 about the approval of safety inspections by Japan's Nuclear Regulation Authority (NRA) for Units 6 and 7 at the Kashiwazaki Kariwa Nuclear Power Plants. 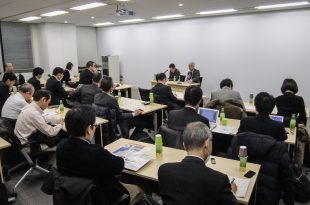 Now that safety examinations of advanced boiling water reactors (ABWRs, 1,356MWe each) have been approved for the first time in the country, he expressed his hope that other BWR examinations would be carried out efficiently, making use of the experience and results obtained this time.

He also announced that the 51st JAIF annual conference would be held in Tokyo on April 9 and 10 under the keynote theme “Nuclear Power, a Key Energy Solution for the Future?”

In a Q&A session during the press briefing, one reporter asked about a bill drafted by a private organization and released on January 10 arguing for the abandonment of NPPs and the promotion of renewable energy. The organization, known as Japan Assembly for Nuclear Free Renewable Energy (JANFRE), advocates the use of natural energy and opposes nuclear power. One of its incorporators is former prime minister Junichiro Koizumi.

The JAIF president said that he welcomed the bill insofar as it provides the public with an opportunity to think about energy. He continued by saying, however, that renewable energy could not have dealt with the surge in power demand experienced earlier that week when the Tokyo urban area was hit by a heavy snowfall. He added that renewable energy should be promoted, but that it was not a question of selecting between renewables or nuclear to the exclusion of the other. Energy issues, he said, would only be resolved with an energy mix that includes nuclear power.

He also responded to concerns over overseas risks about the plan by Hitachi, Ltd. plan to construct new nuclear power plants in Britain with Horizon Nuclear Power. He shared his view on Japan’s efforts to develop nuclear power overseas, saying, “In light of various experiences, including lessons from Westinghouse Electric Company, Hitachi must have been prudent and considered sufficient measures.”