On June 6, the second meeting was held of a working group of the Inter-Ministerial Council that was set up to steadily implement the government’s basic policy on the disposal of treated water from Fukushima Daiichi Nuclear Power Plants of the Tokyo Electric Power Co. (TEPCO). 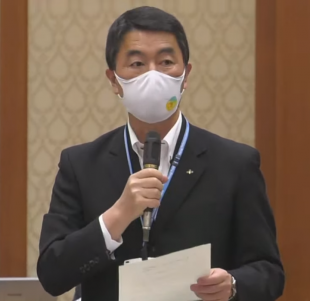 It took place at the Miyagi Prefectural Office in Sendai, following the first meeting of the working group on May 31 in Fukushima Prefecture. The occasion was co-hosted by a joint conference established by Miyagi Prefecture on dealing with treated water.

At the meeting, representatives from prefectural industrial organizations and municipalities—who also belong to the joint conference—expressed their opinions and views, along with Miyagi Governor Yoshihiro Murai, who chaired the conference. State Minister Kiyoshi Ejima of the Ministry of Economy, Trade and Industry (METI), who heads the working group, then responded, along with others.

In his opening remarks, Miyagi Governor Murai said, “Although activities have been completed in many of the affected areas as far as physical matters are concerned—particularly the restoration of infrastructure—more work must be done over the medium-range to long-range future on less tangible matters: namely, providing mental health care for affected people, forging communities in new places after relocation, giving support to rejuvenate industries, and so forth.” He summarized the current state of restoration and reconstruction in the prefecture, a full decade since the disaster.

The governor then expressed his concerns about the offshore release of the treated water, saying, “It will extensively affect many industries in the prefecture, including fisheries, that are only now recovering from the earthquake damage.” The governor asked the government to take local opinions seriously.

Next, Director Yasushi Sato of the Miyagi Fisheries and Forestry Policy Division spoke for many people in the prefectural fisheries industry when he objected to the offshore release of the treated water, explaining their requests to the nation and TEPCO. Among the items asked for were a reconsideration of other measures for handling treated water, a presentation of specific measures to combat unfounded fears and rumors, including compensation after the release, and approaches toward getting import restrictions in other countries lifted.

Meanwhile, Chairman Haruhiko Terasawa of the Prefectural Fishermen’s Cooperative Association referred to the deep-rooted fears and rumors against marine products that still exist, including continued regulations in other countries on importing ascidians (sea squirts). He asked for strong action with fixed goals, such as that the water be released only after all import bans are lifted.

Another person to speak up was Saburo Fuse of the Prefectural Fisheries Products Distribution Council, who asked about the prospects for practical tritium removal technology. The working group also heard opinions from young fishermen.

In his response to the various opinions, METI State Minister Ejima showed his deep knowledge of fisheries gained through his previous experience as mayor of Shimonoseki City (Yamaguchi Prefecture) before becoming a national politician. He talked about his visit to ascidian (sea squirt) fishing locations in Ishinomaki (Miyagi Prefecture).

Regarding technology to remove tritium, he said, “As of now, there is no effective means, but technology advances daily. We are prepared for further reviews at any time.”

Next, Chairman Kanzaburo Sato of the Miyagi Ryokan Hotel Association, speaking from the perspective of tourism, said he was pessimistic about how of hotels and Japanese-style inns would fare when the treated water is released two years from now, given that the numbers of guests have already fallen sharply due to COVID-19.

He then referred to past explanations by the government about the handling of treated water, and complained, “There was never any two-way dialogue.” In circumstances such as that, he said, “Unfounded fears and rumors will never die.” He called first for building a relationship of trust.

Next, Vice Chairperson Hiroko Tonosaki of the Miyagi Prefectural Assembly, speaking about the dissemination of information on the release of tritium water, asked for a prudent response, saying that Miyagi depends on the fisheries industry. She said that it was “irrelevant” to Miyagi that other countries are releasing tritium water.

Next to speak was State Minister of Reconstruction Shinichi Yokoyama, who stressed the importance of conveying accurate information, saying that his ministry would endeavor to do so using influencers and social media.

Another government representative, State Minister Yasuhiro Hanashi of Agriculture, Forestry and Fisheries, talked about the current state of restoration of fisheries in Ibaraki, a neighboring prefecture. He referred to the recent lifting of a ban on shipments of Kasumigaura catfish.

Present at the meeting as an observer, Kazuyoshi Takahama, head of TEPCO’s Fukushima Reconstruction Headquarters, said that the power company would “do its utmost to recover trust” as a party to the accident. He said that the company would try to implement measures to prevent unfounded fears and rumors, and share appropriate information domestically and abroad.