On March 7, a technology conference for next-generation researchers and engineers was held at the Tokyo Institute of Technology, focusing on decommissioning technology to be used at nuclear power plant sites in the future. University and technical college students presented the results of their research and studies at the event.

The conference was held as one of the projects being sponsored by the Japanese Ministry of Education, Culture, Sports, Science and Technology (MEXT) aimed at helping resolve nuclear challenges through cooperation among researchers and engineers in multiple fields and across organizational and professional lines.

In his keynote address prior to the presentations by the students, Professor Hajimu Yamana, chairman of the Nuclear Damage Compensation and Decommissioning Facilitation Corporation (NDF), and the program director for this project, referred to the matters of greatest concern to Fukushima residents who have been unable to return home after the March 2011 nuclear accident.

Noting that many of them frequently spoke of NPP safety, he emphasized that it was the responsibility of today’s engineers to offer a realistic picture of the decommissioning work to be done at the Fukushima Daiichi NPPs.

He then said the decommissioning at Fukushima involved risks from radioactive materials not seen in work to decommission ordinary NPPs, and stressed that “such risks would reach an unacceptable level if nothing were done, accompanied by a deterioration in the buildings.” He concluded by expressing his high hopes for the youth in attendance, saying they had to “maintain the industry’s technological strength in anticipation of the battle ahead, which will take many years.”

Students made presentations in seven areas, including (a) the disposal of fuel debris and radioactive waste, (b) facility management and (c) nuclide analysis.

In the area of remote technology, students from the Fukushima College of Technology reported on their participation in the Hairo Sozo Robocon (Robot Contest), at which robots developed by several student teams competed in the restricted environments of radiation, darkness, etc., simulating conditions in reactor buildings. They explained that the effects of gamma rays on a robot could be controlled by adding granular metal to shielding material made of glass fiber-reinforced plastics (FRPs). 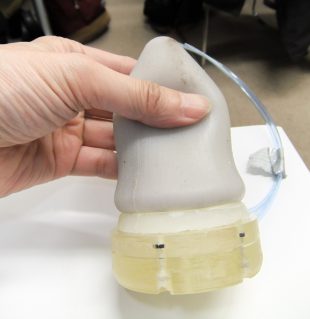 Two presentations were made by different groups from Tohoku University, the first concerning the verification of the speed of right and left driving wheels to avoid the “deadlock” phenomenon occurring when a robot confronts a narrow passage, and the second dealing with experiments using a “jamming gripper” mechanism for robots reminiscent of the hands belonging to the cartoon character Doraemon.

There were two other unique proposals, the first by Waseda University and the second by Fukui University, as follows: (1) radiation shielding using sludge (filthy, high-viscosity water), and (2) a model for calculating the quantity of decommissioning work, based on statistical analyses of management data from the demolition of the Japan Power Demonstration Reactor (JPDR: BWR, 12.5MWe), the first reactor to generate electricity in Japan.

A ceremony was held after the conference to recognize excellent presentations. Professor Toru Obara of the Tokyo Institute of Technology, who served as chairman of the executive committee, praised the students’ ideas, commenting that some of them “could be used immediately at decommissioning sites.”