IAEA Holds 65th General Conference in Vienna, with Japanese Minister of State for Science and Technology Delivering Statement in the General Debate

The 65th Annual Regular Session of the General Conference of the International Atomic Energy Agency (IAEA) was held from September 20 through 24 in Vienna. On the first day—the opening day—Japan’s Minister of State for Science and Technology Shinji Inoue, under the Cabinet Office, delivered a video statement in the general debate. He did the same last year. 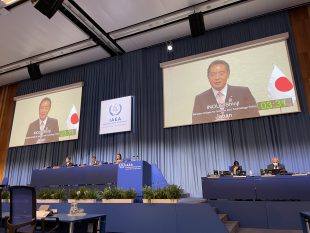 Minister Inoue began by praising IAEA Director General Rafael Mariano Grossi for his leadership in promoting the Agency’s professional activities despite the hardships of dealing with the COVID-19 pandemic. Inoue also referred to Japan’s support for the Agency’s activities in the area of pandemic countermeasures. Regarding decommissioning at the Fukushima Daiichi Nuclear Power Plants (NPPs) a decade after the giant earthquake and nuclear accident of March 2011, the minister noted that reviews by the IAEA would be carried out on safety, regulation and monitoring in the matter of water treated with multi-nuclide removal equipment (ALPS: Advanced Liquid Processing System). Water meeting regulatory standards for substances other than tritium will be released into the sea. Minister Inoue ...more

On September 14, the Japan Atomic Energy Commission (JAEC) published an English version of the latest White Paper on Nuclear Energy. Given that last March marked a full ten years since the March 2011 accident at the Fukushima Daiichi Nuclear Power Plants, the document features the past decade in a section entitled “Fukushima Today,” including verification of the accident, lessons learned, and the recovery and reconstruction of Fukushima

“Who could have imagined,” the White Paper asks introspectively, “the scope of an accident causing such serious damage to people and regional communities for more than ten years?” It cites the problem of “ungrounded rumor and reputation damage,” and urges that those, too, not be forgotten. It also calls on all people concerned with nuclear energy not only to learn the lessons of the accident, so that no such accident can occur again, but also to “remember the memories” as well as the fact that the negative reputation resulting from the accident remains, inflicting suffering on the people of Fukushima. The White Paper goes on to say that the issue of ungrounded rumors obstructs recovery and reconstruction. It says that steady efforts are needed by individuals, including “not only prof...more