Mr. Matthew MAIRINGER, member of the Board of Directors of the Canadian Nuclear Association (CNA), recently visited Japan to participate in the 55th JAIF Annual Conference. In an interview held during that time, we asked him about the advantages of the development of small modular reactors (SMRs) now going on in Canada, and about efforts to communicate with the public, particularly younger people, through activities in North American Young Generation in Nuclear (NAYGN), all of which he is involved in personally.

Saying that pressure on global energy relationships resulting from the current Ukraine crisis should cause each country to reassess the advantages of nuclear power, he stressed the significance of introducing SMRs and other advanced, safer nuclear reactors. The most important challenge, he said, was securing acceptance from the public, for which he said that he would work to promote dialogue. In the interview, he showed his determination to realize a new potential for nuclear energy.

What motivated you to work in the nuclear power industry? Did anything change in your awareness, both before and after you started working?

When I was in the 9th grade, what would be a third-year student in junior high school in Japan, I had to write an essay in English class. I happened to pick nuclear energy as my subject. That was it. As I researched it, though, I came to know that nuclear technology is not only an efficient means to generate electricity, but also contributes to society in a broad range of areas, including medicine, industry and agriculture. It is a source of energy and a tool for meeting environmental challenges. Because working in the nuclear field would be meaningful as well as stable, I decided that it would be a worthwhile career.

What I felt after actually working in nuclear power was that gaining understanding from the public was important, in order that nuclear might be used broadly within society.

When I was studying nuclear engineering, I concentrated on the technical aspects. After I had some experience, I realized that it would be more useful for the growth of nuclear energy to help gain understanding from the people. I thought it was necessary to try to eliminate prejudices and false assumptions via communication.

For the past decade, I have been engaging in dialogues with the public through YGN’s activities. I think it is important to continue.

The global energy situation, including factors such as the Ukraine crisis, is constantly changing. What do you think about the significance of nuclear use and its future today?

What became clear from the Russian invasion of Ukraine is the importance of self-sufficiency in energy and food. It is particularly important for each country to ensure the means of power generation so as not to be at the mercy of resource-rich countries such as Russia.

In the current circumstance of energy shortages, it is the public that suffers eventually.

I think Germany may now have realized that. It had depended on Russia for natural gas, and Russia used that as a diplomatic bargaining chip. Belgium is in a similar position. That country took a stance on nuclear phase-out, and now is forced to reconsider it.

In the current circumstances where all countries must squarely face the climate challenge, nuclear power is the best choice, together with renewable energy.

Many power facilities in Ukraine have been destroyed and power supplies have been interrupted. Yet my understanding is that nuclear plants continue to operate and provide electricity there.

Safety and safe operation are among the advantages of nuclear power. When SMRs are realized, even safer operation will be the rule.

The Ukraine crisis seems to have triggered governments in many countries to reassess nuclear power. I hope its global estimation will similarly rise.

What do you think of small modular reactors (SMRs) supposedly being the future of nuclear use in Canada, and the development of human resources to support them?

Canada may be the leader in development of SMR technology.

The governments of the provinces of Ontario, New Brunswick, Saskatchewan and Alberta concluded a memorandum of understanding (MOU) toward issuing a joint SMR strategic plan.

The federal government issued Canada’s SMR roadmap, based on which an action plan was prepared. The plan includes measures to develop human resources, secure supply chains and more, and addresses issues raised by the prospect of utilities introducing SMRs.

The Canadian government intends financial support for development of next-generation SMR technology and announced its plans to invest in industries constructing SMRs in Canada, including Britain’s Moltex Energy, Canada’s Terrestrial Energy, and Westinghouse of the United States.

The major SMR development projects are underway. One involves the start of operation in 2026 of a small modular high-temperature gas-cooled reactor (a micro-modular reactor, or MMR) by Ontario Power Generation Inc. (OPG). One of the other projects, also by OPG in Ontario, uses GE Hitachi’s BWRX-300, with 2028 eyed for the start of operation. 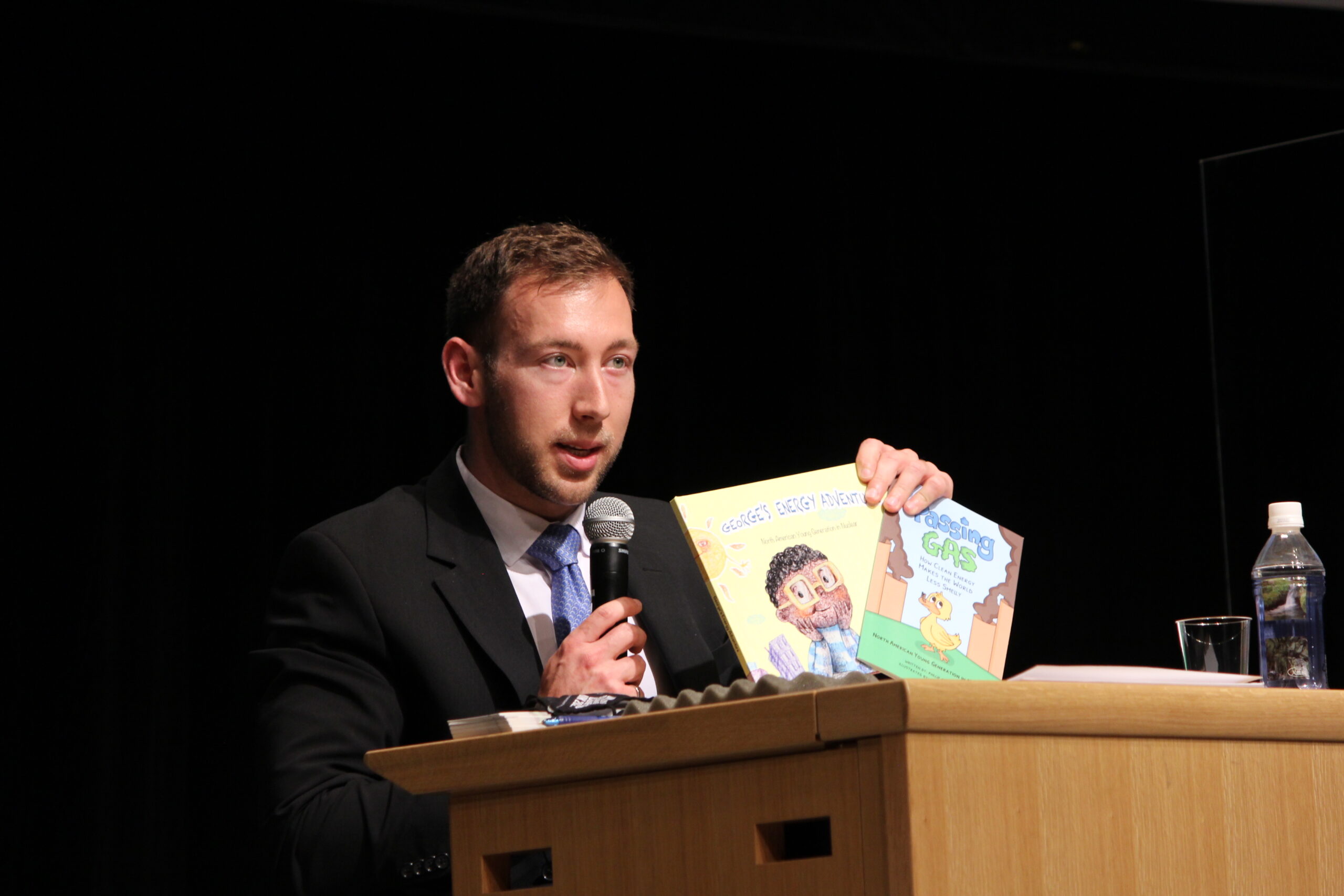 Regarding the introduction of SMRs, is there anything that you think is a particularly important issue?

The most important issue is agreement from the public, in other words, public acceptance (PA). For that, we have to continue our dialogues. The Canadian government may not risk promoting anything that hasn’t been verified or that the public doesn’t consider a worthwhile investment.

Ideally, the benefits—the fact that nuclear energy can be used to deal with climate issues and energy shortages, and that it can provide hydrogen and district heating—will be understood, and the public will voice support for those nuclear projects.

At the same time, one technological issue is generation-IV new technology. The best scenario would be to employ proven, secure technology for the first unit.

In terms of developing new technology, the industry’s expectations are great for young researchers and engineers. You have been active in a broad range of areas. What do you think of the current situation? What is your assessment, and what are your expectations for the future?

After the accident at Fukushima Daiichi ten years ago, public opinion was highly critical. But with the work since then, I now have the impression that quite many young people welcome the use of nuclear energy. Although I do not know much about the Japanese situation, I suspect the view is more positive among young people in my country than in Japan.

I think it’s important that they be made aware of nuclear’s benefits.

We have to let them know that nuclear is an environmentally friendly, clean power source, and that nuclear technology has additional benefits in areas such as medicine, industry, and agriculture.

With the technology now so innovative, jobs in the field of nuclear energy are something young people might see as cool. I am trying to reinforce that impression. I want them to appreciate that working in nuclear is not an ordinary job. It’s rewarding, and something they can be enthusiastic about.

For that, I want to create opportunities for young people to participate in symposiums and exchanges, and visit nuclear power sites—to help them fully realize the nuclear benefits. 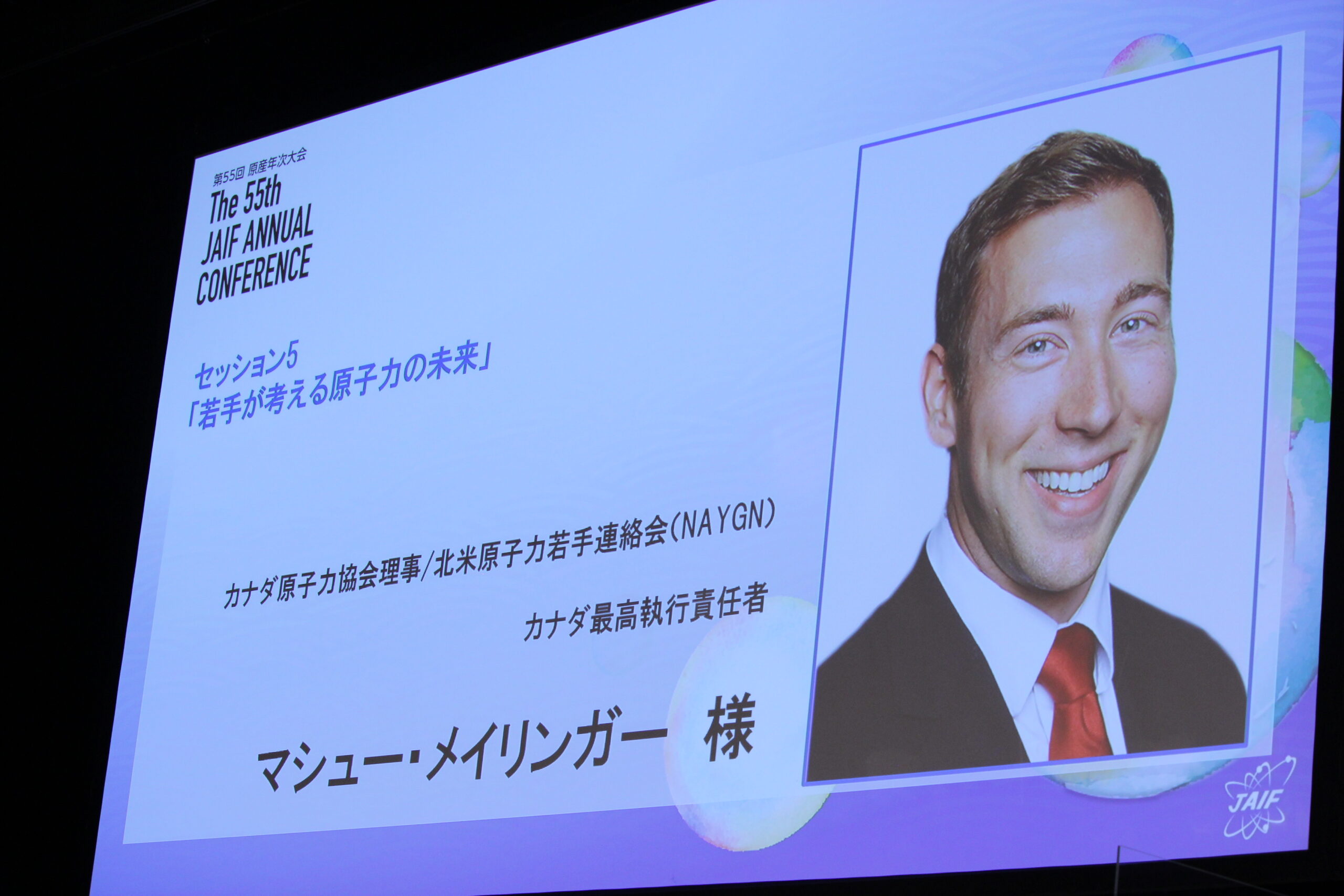 Do you mean to create such opportunities through YGN?

Yes. I’ve been doing that through YGN. I want to continue and do more.

In June, I will become YGN’s president for three years. I intend to emphasize and enhance our international activities. I want us—I mean younger people—to share best practices among ourselves, across national borders.

During my stay in Japan, I plan to visit Fukushima Daiichi and meet with Japan YGN. I look forward to discussing their and our activities and learning from them.

North American Young Generation in Nuclear (NAYGN) holds many events for children, such as drawing and essay contests. We also create illustrated books and read them to children.

Among our political activities, we convey the views of our generation to the government and relevant organizations, and we participate in public hearings held by the provinces and present our opinions there.

Making use of the broad range of our network, we maintain exchange activities with people in regional communities. An important part of our effort is creating opportunities to meet local people and, as YGN members, making a good impression on them. We will continue to strive to deepen understanding of nuclear energy.

SMRs Will Open Up Our Future

Given the current changing situation, there is a movement in Europe to reexamine nuclear power as the primary power source toward decarbonizing society. What do you think the role of nuclear energy should be in terms of environmental issues?

Let me talk about the advantages of SMRs and the new markets for nuclear use that will result when they are introduced.

In Canada, when conventional large nuclear reactors are employed, it has been the case in some provinces that power supply substantially exceeds demand. In that respect, SMRs can respond flexibly according to the needs of each province and create new market opportunities.

A related issue—and opportunity—is how to respond to power demand in remote areas. Roads can be impassable in winter, so fuel for diesel generators must be prepared in advance. SMRs are a more stable power source and can contribute to decarbonization as well.

A similar opportunity exists in mining, which is a major industry in Canada. If SMRs are in place at natural resource drilling sites, not only can they supply stable power safely, but they can also substantially reduce carbon emissions. Given the broad range of benefits of SMRs—including application to hydrogen production and desalination, and flexible responses to power demand via load-following operations—their use will open up various new possibilities.

SMRs are also a benefit in the transportation sector. Their use as motive power for vessels effectively means enabling decarbonization quite quickly. Small reactors for vessels are so far primarily used for military purposes, such as in submarines, aircraft carriers, etc. I hope a new market for SMRs for civilian vessels will develop soon.

A young energy specialist belonging to the Energy Council of Canada, and a board member of the Canadian Nuclear Agency (CNA). He is currently Canadian Operating Officer of the North American Young Generation Nuclear (NAYGN). He is a qualified project management professional (PMP) and professional engineer (PE), and holds a bachelor’s degree in nuclear engineering and a graduate diploma in nuclear technology from the University of Ontario Institute of Technology (Ontario Tech University). He acquired more than eight years of experience at the Darlington and Pickering Nuclear Generating Stations of the Ontario Power Generation Inc. (OPG) while working for that company.