In Session 3, on April 13, a report and a presentation were delivered under the theme “Progress and Challenges in Fukushima Daiichi Decommissioning.”

He was followed by Gustavo CARUSO, director and coordinator of the Department of Nuclear Safety and Security at the International Atomic Energy Agency (IAEA), who gave a presentation (via video message) on the theme of “IAEA’s Review of Safety Related Aspects of ALPS Treated Water Discharge at the Fukushima Daiichi Nuclear Power Station.”

Regarding the handling of water treated by the Advanced Liquid Processing System (ALPS-treated water) at the Fukushima Daiichi, the basic policy announced by the Japanese government on April 13 last year included the statement that “discharge of the water into the sea will be started two years from now.” That announcement came exactly one year before the holding of the 54th JAIF Annual Conference this time.

FDEC’s Ono said, “Eleven years have passed since the accident at the Fukushima Daiichi. Decommissioning has made steady progress, and we are only one step away from starting the removal of fuel debris—the citadel, or, as it were, the honmaru (the main building of a Japanese castle) of our efforts.”

Showing a video that traced the steps taken following the accident, he explained TEPCO’s efforts involving (1) contaminated and treated water measures, (2) the removal of fuel in spent fuel pools, and (3) the removal of fuel debris. Concerning the capacity of the tanks in which the ALPS-treated water is being stored, TEPCO is now ascertaining when all of them will be filled, also taking into account rainwater at the site.

Ono continued, “As a practical matter, it would be difficult to continue installing new tanks. In order to steadily promote decommissioning, the site premises have to be utilized effectively, including ensuring space for the storage of fuel debris, which is more demanding.” After describing the current conditions, he continued talking about the discharge of the water into the sea, saying that the company would try to enhance and strengthen the scope of monitoring, prevent leakage from the tanks, disseminate information, and strive to avoid adverse effects on reputations.

On March 24, TEPCO issued a sea-area monitoring plan, based on which Ono announced that the company would start sampling on April 18 in the sea area near the Fukushima Daiichi and along the Fukushima coast. As the main implementing body for offshore release of the ALPS-treated water, TEPCO will gather seawater, fish, seaweed and more, and continue to check the pre-release state of the diffusion of various elements, primarily tritium, among the marine life in the area.

The removal of fuel from the spent fuel pools at Units 3 and 4 was completed in February 2021 and December 2014, respectively. Fuel removal at Unit 1 is scheduled to start during FY27-28, and that at Unit 2 during FY24-26. At Unit 1, a large cover will first be installed over the reactor building, under which the rubble and other items will be removed.

Ono said that the work was initially to have been implemented without a cover, but that, prioritizing people’s safety and feelings of security, the company had decided on a cover to prevent dust containing radioactive substances from scattering. Coincidentally, the installation of the reactor building cover began on April 13, the day of Session 2 of the JAIF Annual Conference, and Ono emphasized that TEPCO would carry out the work safely and steadily toward completion in 2024. 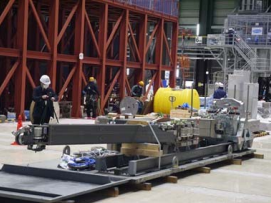 As for Unit 2, the company decided on a method involving obtaining access from the south instead of demolishing a portion of the reactor building, for the same reason as the cover: to prioritize the prevention of dust from scattering and to ensure safety. Currently, as part of that, work is underway to install an assembly base for the fuel removal effort.

Regarding the removal of fuel debris, to be done first at Unit 2, experimental removal is planned in FY22. Toward that end, a robotic arm (18m long) was developed and produced in the UK. Ono showed participants a video illustrating the arrival of the robotic arm in Japan last July and the steps taken since then through operational training using mockups at the Naraha Remote Technology Development Center, a facility owned by the Japan Atomic Energy Agency (JAEA). in Naraha Town, Fukushima Prefecture. He said that he expected it to incrementally lead to accelerated debris removal in the future.

At Unit 1, submersible remotely operated vehicles (ROVs) were employed in February 2022 toward investigations inside the reactor containment vessel (RCV). The removal of debris is next expected to take place at Unit 3, given the progress there in environmental improvements inside the reactor building.

Ono also mentioned TEPCO’s basic principle of the “coexistence of reconstruction and decommissioning,” citing the example of the completion of the removal of the exhaust stack for Units 1 and 2 in May 2020 by companies based in Fukushima, and referring to the importance of cooperation with local companies in decommissioning. He then closed his report.

Regarding the handling of the ALPS-treated water, the Japanese government and the IAEA signed an agreement on July 8 last year for the Agency’s assistance in three areas: the dispatch of review missions, support for environmental monitoring, and the assurance of transparency toward the international community. 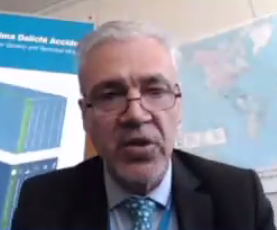 Director Caruso said that the IAEA review was focused on two points: (1) whether the plan and actions prior to release of the water by the parties requesting the review—Japan’s Ministry of Economy, Trade and Industry (METI) and TEPCO—were in accordance with international safety standards, and (2) whether the plan and actions of the Nuclear Regulation Authority of Japan (NRA) for examination, confirmation and approval of facilities involved in the release, were in accordance with the IAEA’s international safety standards.

He said that the Agency’s conclusion would be based on benchmarks in the safety standards, applied to three distinct periods: prior to approval, from approval to release into the sea, and after release. Caruso added that the IAEA was inspecting each item by referring to descriptions stated in the safety standards. He stressed the IAEA’s intention to conduct its review fairly and from a long-term point of view, and referred as well to the task force, the main body conducting the review, which had been established in the IAEA at the direction of Director General Rafael Mariano Grossi.

Director Caruso, heading the task force consisting of IAEA officials and experts from IAEA member countries, showed his determination to lead the effort effectively, saying that the expertise in each technical area would be integrated and determinations made as to whether IAEA safety standards were being observed. The Task Force will then issue its conclusion.

Although the IAEA review missions faced some restrictions coming to Japan due to the continued COVID-19 situation, missions were dispatched to METI and TEPCO in February 2022, and to the NRA a month later in March. Review reports are expected to be published at the end of April or the beginning of May, and in June, respectively. In the second half of 2022, a follow-up mission will be dispatched.

Later, a final, integrated report will be issued in the first half of 2023 (around two months before the release is to start), containing specific points noted by the task force as well as its conclusions.