JAIF Chairman IMAI makes an address at the Opening Session

On April 12, the 55th JAIF Annual Conference opened at the Tokyo International Forum, with participation both in person and online. For two days, through April 13, a total of 660 people taking part from Japan and overseas—under the keynote theme “Global Sustainable Development and Expectations for Nuclear Energy”—considered the role that nuclear power should play, given its value and significance as a tool to confront climate change, and for societal and economic development.

In his remarks at the opening session, JAIF Chairman IMAI Takashi stated, “Around the world, momentum has been building toward the target of carbon neutrality, and nuclear power is being actively promoted as a concrete solution,” giving examples of recent moves in the UK and France. He continued by saying, “Innovation, too, is a prime focus. Many projects for the development of advanced reactors and the like are underway in various countries with governmental support, including Japan.”

The JAIF chairman emphasized the global reassessment of nuclear power as a “direct means toward achieving a decarbonized society.” Additionally, he said that with the international political situation becoming less and less stable—including the Ukraine crisis—nuclear energy was “becoming increasingly important, as well, from the viewpoint of energy security.”

Chairman Imai then referred to the topics to be taken up in each session. On the first day of April 12, Sessions 1 and 2 were to consider “the kinds of national strategies Japan and Western countries are developing for the use of nuclear power and to improve the nuclear business environment,” he said. On the following day, Session 3 was to deal with the decommissioning of the Fukushima Daiichi Nuclear Power Plants, and Session 4 was to discuss the significance of and expectations for the nuclear back-end-business, including the Rokkasho Reprocessing Facility. Also to be held on the second day was Session 5, in which young panelists from Japan and abroad were to discuss the “Future of Nuclear Power in the Eyes of the Young Generation.” 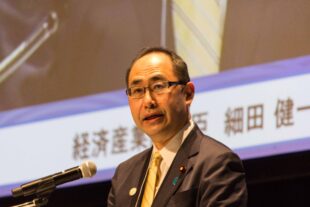 Next, HOSODA Kenichi, State Minister of Economy, Trade and Industry (METI), delivered remarks to the Opening Session as a guest. Referring to the recent tight supply-demand balance, he said that the Japanese national government would endeavor to ensure a stable supply of energy. He added that the government continues to see decommissioning, contaminated water treatment, and reconstruction of Fukushima, as issues of the highest priority, and will work steadily on them.

He also said that the Russian military invasion of Ukraine underscored the importance of Japan’s building a stable energy supply system. He also referred to movements in Europe to positively reassess nuclear energy as part of diversifying fuel supply methods, with an eye toward breaking the current dependence on Russia.

The minister went on to explained the current state of energy supply in Japan, saying, “For Japan, surrounded by the sea, there is no single, perfect energy source that can meet the needs for safety, stable supply, economic efficiency and environmental compatibility. It is important to utilize various energy sources, including nuclear energy, in good balance.”

Regarding the immediate problem of restarting the country’s nuclear power plants (NPPs), Minister Hosoda said that, to smooth the progress, the national government, in cooperation with the industry, would support appropriate responses by power utilities to the regulator’s safety examinations, and that it would be at the fore in tenaciously carrying out activities to obtain cooperation from concerned parties, including municipalities. 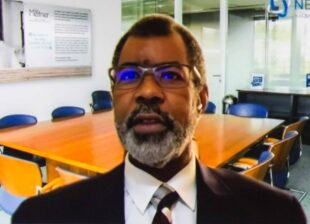 The presentation by NEA’s Magwood was entitled “Global Sustainable Development and Expectations for Nuclear Energy” Repeatedly noting that countries must seriously think about energy security—and acknowledging that such factors as the presence of natural resources might lead to different energy policy decisions—he said that many countries view nuclear energy as a key element in their decarbonization strategies, against the backdrop of shrinking coal use, the recent focus on CO2 reductions, and the like. The NEA’s calculation was, he said, that “on average, the scenarios reflect the need for global nuclear capacity to triple by 2050 from the level in 2020.”

The NEA reviewed 90 pathways shown in the special report “Global Warming of 1.5°C,” published by the Intergovernmental Panel on Climate Change (IPCC), in a review of pathways yielding emissions reductions sufficient to limit the average global temperature rise to less than 1.5°C. Based on a report made by the IEA and NEA entitled “Projected Costs of Generating Electricity 2020,” he said that “while, on average, overnight construction costs reflect cost reductions, coal is no longer competitive in most markets,” and emphasized that “the long-term operation of NPPs is the least-cost option.”

Mr. Magwood then pointed out challenges to achieving net-zero emissions by nuclear energy, saying that “views on long-term operation vary around the world due to differing policy and regulatory approaches,” and extensions of operating lifetimes may require a huge investment. The largest problem (among others) for nuclear, he said, was that markets do not clearly recognize the value of existing nuclear plants. 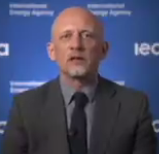 Next, IEA’s Gould delivered his presentation, entitled “An IEA Perspective on the Role of Nuclear Power in Secure Energy Transitions.” Referring to the Agency’s “Net Zero by 2050 Scenario,” he explained its forecast that “nuclear power [would] double over the next three decades.” He repeated the point that “nuclear energy is important to complement increasing renewable energies.” Global electricity demand, he said, was expected to grow three-fold or so from 2020 to 2050 due to ongoing electrification efforts.

On the supply side, he forecast that wind power and solar photovoltaic energy would see the lion’s share of growth, building on the foundation of nuclear energy and hydropower. He noted also that, due to the reduced use of fossil fuels, various “dispatchable” power sources—including storage batteries and hydrogen-based—would be required to reach net zero.

Regarding Japan, meanwhile, Mr. Gould said, “It is very important to restart NPPs safely, for the sake of both reduction of CO2 emissions and stable supply of electricity.” 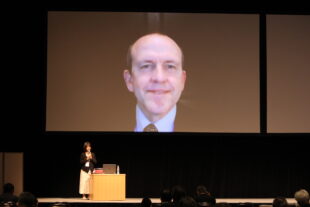 Lastly, the “Leader Perspective” session, moderated by MURAKAMI Tomoko of the Institute of Energy Economics, Japan (IEEJ), featured a talk by President and CEO Chris Levesque of TerraPower about his company’s development of advanced nuclear reactors.

Aiming to begin operating a demonstration-class small sodium-cooled fast reactor called “Natrium” in 2028, TerraPower holds Japan’s experience with the fast reactors “Joyo” and “Monju” in high regard. In January, the firm signed a memorandum of understanding (MoU) with the Japan Atomic Energy Agency (JAEA), Mitsubishi Heavy Industries (MHI), and Mitsubishi FBR Systems (MFBR). In his talk, the TerraPower CEO emphasized that his company “wanted to reflect what Japan had experienced and learned in ensuring safety.”

Mr. Levesque also explained that the Natrium project had gained the support of the Advanced Reactor Demonstration Program (ARDP) of the U.S. Department of Energy (DOE), and praised the strategic move by the United States toward rebuilding its leadership in nuclear technology.

A Natrium demonstration reactor is to be constructed at the site of a to-be-retired coal-burning power plant in Kemmerer, Wyoming, in the United States. The TerraPower CEO said that the region had already contributed greatly to the energy industry in that country for more than a century, and that his company was keenly interested in the continued involvement of the local community with the firm’s innovative technology.

Following his presentation, Ms. Murakami, in Q&A style, asked the executive a series of questions about Natrium, including the company’s plan to construct the first plant and its marketing strategy for the reactor.