【The 55th JAIF Annual Conference】 Session 4: “Significance of and Expectations for the Nuclear Fuel Cycle”

Japan has aspired to establishing a nuclear fuel cycle system since the early stages of its nuclear introduction. Now, however, the environment for doing so has become severe. Given that the Rokkasho Reprocessing Plant—a key to completing the cycle—should be finished soon, the purpose of this session was to flesh out discussions on current issues and expectations for the future, while reviewing the progress up to now.

First, Christophe XERRI, director of the Division of Nuclear Fuel Cycle and Waste Technology at the International Atomic Energy Agency (IAEA) gave a presentation entitled the “Nuclear Fuel Cycle Today.” He stressed the achievement of Sustainable Development Goals (SDGs) and the significance of the nuclear fuel cycle to a circular economy (CE). 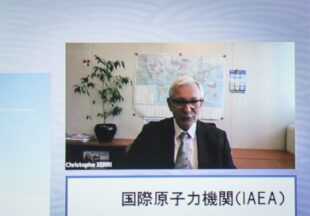 There are two back-end options: direct disposal and recycling. Recycling, that is, reprocessing, is already established as the choice for managing spent fuel and there is more than forty years’ experience with it worldwide, including in Japan.

Plutonium extracted from spent fuel by reprocessing is used as fuel. Some use is based on loading the cores partially (25 to 50%) with MOX, and the remainder with uranium fuel. Plutonium recycling in LWRs in that way saves up to 25% of the natural uranium resource. Newer reactor designs can accommodate 100% MOX cores. In Russia, MOX fuel is loaded in BN-800 fast reactors.

All of us must think long term. Nuclear use is not going to end in 2050. As long as nuclear fission technology remains a solution to a global problem, there will be nuclear use: in 2050, in 2150, in 2350. As a result, reprocessing—making efficient use of the resource—is important. In the near future, the nuclear cycle could be closed with reprocessed fuel alone, beyond the mixing of reprocessed fuel and new fuel in LWRs.

According to an IAEA report entitled “Mixed Oxide Fuels Design, Operation and Management,” studies are underway on new MOX fuel, including REMIX and CORAIL. Various types of nuclear reactors, SMRs and high-temperature gas-cooled reactors (HTGRs) will be reported on at a forum scheduled this coming September. They will be receiving approval and support from many IAEA member countries at the Conference on Fast Reactors and Related Fuel Cycles (FR22) to be held next week.

Nuclear power can meet two very important needs: for energy security and for decarbonization. Both are SDGs, and many countries are looking to nuclear power for the sake of achieving those goals. A step deeper into SDGs is the circular economy (CE), which favors recycling. “CE” is not an addition to SDGs, but part of it. CE is directly connected to SDG 12, “Responsible consumption and production.”

Reprocessing technologies are also an opportunity for the resource recovery necessary for the long-term sustainability of the nuclear fuel cycle. Long-term operation of nuclear power plants also supports CE. Because volumes of waste can be reduced through reprocessing, waste avoidance at each step of the fuel cycle is part of CE. Improvements to fuel efficiency are also part of CE. The term “CE” is well recognized societally, and it is effective to speak of nuclear power as being related to CE. Doing so is a way to move nuclear power into the mainstream of society.

Next, YAMAGUCHI Akira, director of the Nuclear Safety Research Association (NSRA), made a presentation entitled “Nuclear Fuel Cycle—On the Value and Significance.” He strongly urged that its significance be reaffirmed toward the goal of carbon neutrality. 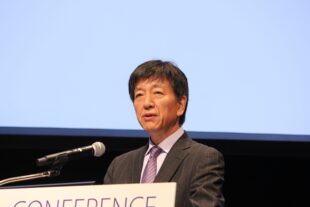 Light water reactors (LWRs) are the mainstream of nuclear power, yet make use of only a small fraction of the available thermal neutron energy, the enormous quantity of neutrons produced in fast reactors. Such energy has great value in diverse uses. In order to make the most effective use of uranium resources, Japan has endeavored to utilize neutron energy for “breeding.” That, in turn, can reduce the volumes of high-level radioactive waste (HLW), and potentially toxicity. In the future, there will be more utilitarian uses. In other words, using nuclear power means making maximum use of the potential of neutrons—via reprocessing, the nuclear fuel cycle, and fast reactors.

World primary energy consumption increases every year. Percentages of non-fossil fuels, including nuclear, are small and CO2 emissions continue to rise. In order to build a sustainable society, one-step-further technological development and policies on energy are needed. Given the major constraints imposed by the quest for carbon neutrality, there is nothing to do but use resources effectively through the nuclear fuel cycle in order to ensure a stable supply of energy.

MASUDA Naohiro, executive president and CEO of Japan Nuclear Fuel Limited (JNFL), followed with a presentation on the current status of his company’s reprocessing plant. 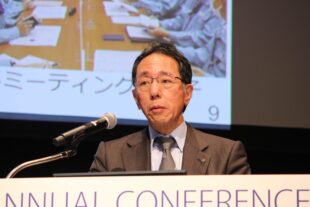 The Rokkasho Reprocessing Plant (RRP) is an integrated fuel-cycle plant, without parallel in the world, where fuel-cycle businesses are implemented from waste management to reprocessing, enrichment, and more. Utility companies, general contractors and manufacturers work together using an “All-Japan” approach.

In response to new safety requirements, new measures were taken at the RRP against severe accidents, including introducing movable air compressors to prevent hydrogen explosions. The scope and scale of the design and work plans for construction at the RRP are comparable to those for building five or six nuclear reactors. With the range of activities going on in one place, people from manufacturers and general contractors (about 400 people) gather at the gym and work together to strengthen cooperation. About 5,000 workers are engaged in construction every day to improve the safety of the RRP. In the severe winter of Rokkasho, warm-air blowers were used to dry paint and speed the work, and coverings were erected when concrete was poured to maintain its strength.

Construction work will continue to improve safety at the RRP while design and construction plans are under review. The RRP is expected to be completed soon. The operation of the entire facility was suspended after vitrification issues were revealed in 2007. All issues at that time were fully identified and operational methods were established in 2013 to resolve them. RRP operation will be resumed soon, but, due to the long operational suspension, there are concerns that the operators may be “out of practice” in a way possibly affecting its restart. Action plans are being issued and implemented to address that.

Operators have been sent, and will continue to be sent, to the La Hague Reprocessing Plant in France for training in the start-up and shutdown of an actual facility. For example, hearing the sounds of shearing and end pieces dropping, they will come to associate such stimuli and cues with operational status, and thus gain confidence. Similarly, the training is repeatedly conducted in order to enable the operators to improve their skills further, allowing them to cope with severe accidents due to the loss of external power sources.

External expertise and reviews are also positively introduced, with reviews implemented by overseas experts and external organizations. Given that the reprocessing plant is a chemical plant dealing with chemical substances, we are mindful to manage it not only from a nuclear viewpoint but also from a chemical one.

The trust of local communities is essential to carrying out nuclear fuel cycle activities. Given that the plant is deeply rooted in the local community, employees native to there are at the forefront of PR activities, enabling them to listen to the opinions of local residents, which are then reflected in company management. Recently, COVID-19, coupled with the remote location geographically, has made it difficult for people to visit the site directly, so online visits are now carried out via the facility’s website.

The final presenter was Philippe KNOCHE, CEO of Orano. He talked about nuclear energy’s contributions to resolving issues of climate and the circular economy (CE), and his expectations for Japan. 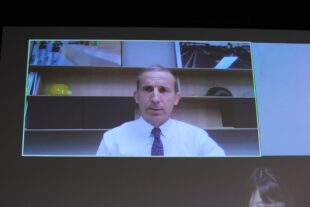 The JAIF Annual Conference offers one of the best opportunities to discuss nuclear energy and climate issues, and identify anew how fuel cycle evolution can deal with CE challenges.

Figures computed by the IPCC (Intergovernmental Panel on Climate Change) and other international agencies indicate that the increase in global temperature has to be held to less than 2°C in order to sustain a climate suitable for human beings. That means our carbon emissions must be cut to one-quarter and CO2 emissions from electric power must be reduced to zero. Accordingly, electrifying our uses will be a key feature of tomorrow. Such changes will require both more electricity and more low-carbon electricity. Demand for electricity will double in the coming decades, with the lion’s share supplied by renewable energy but also by nuclear power, as both are low carbon sources. Nuclear energy is an obvious part of the solution, helping to meet the climate challenge in a sustainable manner.

In France, fifty-four reactors are in service. The nuclear share of the energy mix is more than 70%. As a result, electric power and heat generation are not major sources of CO2 emissions. In Japan, on the other hand, only ten nuclear power plants have been restarted, and carbon emissions originating from power and heat generation are nearly twice those of France. France is moving ahead, working to electrify vehicles, improve the energy efficiency of buildings and industry, and increase the generation of electricity. Japan still has to decarbonize its existing power sector. The deadline of 2050 is the same for us all. Japan may have to double its efforts and investment.

Orano deals with all aspects of the fuel cycle, from mining, conversion and enrichment, to the reprocessing of spent fuel. It provides services to fuel cycle industries via transportation and engineering. France deals with CE challenges by fuel recycling. As soon as operation of the MELOX plant began in the 1990s, many countries showed interest in spent fuel reprocessing. There will be more opportunities for power generation reusing spent MOX fuel and valuable resources in waste. Establishment of the fuel cycle strengthens CE and is the first step in improving public awareness of nuclear energy. Japan’s success in spent fuel recycling is important for Orano. Japan and France have established a long-term, reliable relationship.

For the past two years, Orano has been engaged in development of a new type of MOX fuel, called MOX2, for existing LWRs. Its first irradiation test in PWRs is planned before 2030, and Orano aims to deliver a commercial product in the 2040s, which could easily be used in reactors holding a MOX license.

Meanwhile, international cooperation is essential for successful R&D programs toward commercial fast reactors, and Orano has developed various international partnerships. In the United States, in the Advanced Reactor Demonstration Program (ARDP), Orano has a cooperative relationship with TerraPower. Through multilateral programs, development of fast reactors, including molten salt reactors (MSRs) and sodium fast reactors (SFRs), will be accelerated. Ambitiously, Orano hopes to contribute to development of a small MSR demonstration unit fueled with plutonium before 2035. It is assumed that, by 2050, a fleet of LWRs fueled with MOX2 will be transmitting power, and SFRs/MSRs will reprocess the radioactive waste from those LWRs. If that kind of synergetic relationship can be established between LWRs and SFRs/MSRs, high-level radioactive waste could be reduced substantially.

Nuclear is being re-recognized and Japan has significant know-how that can be utilized in the development of next-generation reactors. Japan’s Mitsubishi Heavy Industries (MHI) and the Japan Atomic Energy Agency (JAEA) have recently invested in a small sodium-cooled fast reactor, called “Natrium.” Orano is ready to support development of advanced reactors with a Japanese partner. 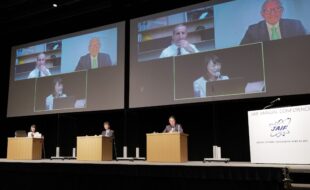 Next, a panel discussion was held dealing with three subjects, based on presentations up to that point. They were: (1) nuclear’s role and value in a circular economy (CE), (2) the significance of the nuclear fuel cycle, and (3) understanding by the public.

Today, as society matures, we must work to solve multiple problems simultaneously. The session helped us recognize anew the many global challenges we face and how nuclear energy and the nuclear fuel cycle can be part of the solution.